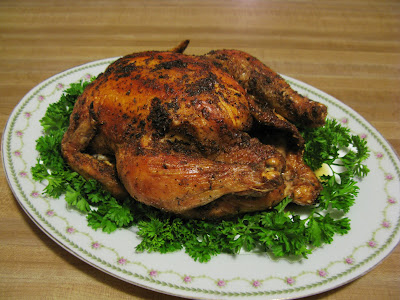 One of the traditions of childhood was the frequent visits to Grandma's house on Sundays.  We'd be welcomed by her many hugs and kisses; my grandfather would stand stoically in the background, grim-faced, resigned to the high energy of his only three grandchildren.  Occasionally, if he were overcome by a flash of affection he might pat us on the head and then he and my father would disappear to talk about manly things,  the Saturday night boxing match or hunting.

When the family gathered again, it was often to a chicken dinner, fried, fricasseed, or roasted.  There would always be mountains of fluffy mashed potatoes, and because I loved it, creamed corn.  It has been years since I've roasted a whole chicken, mostly because Ole Sweetie-Pi doesn't care for meat on the bone (I had to slice it before serving him, grins.)

However, I was visiting my friend Carrie of  Carrie's Cooking and Recipes and she had posted a roasted chicken and gravy recipe that I just couldn't get out of my mind.  She made it look and sound so good that I actually went back and posted comments on two separate occasions, telling her how much I wanted to make it.  Have you visited with Carrie?  She's got some good cooking going on at her blog!

When Carrie  roasted her chicken she did a long and slow roast, 250*F for four hours; I opted to roast mine at 350* for just under two.   I also massaged olive oil onto the entire outside of the chicken before applying the rub, and basted the chicken  while it was was roasting.  I just brushed some of the pan drippings over the chicken, nothing fancy..

The result?  This chicken is  so good., easily the best I have ever made.  The meat was moist and fork tender.  The spices and herbs in the rub perfectly seasoned the chicken and the gravy.  This recipe is a keeper.  Thanks, Carrie, we loved this roasted chicken! 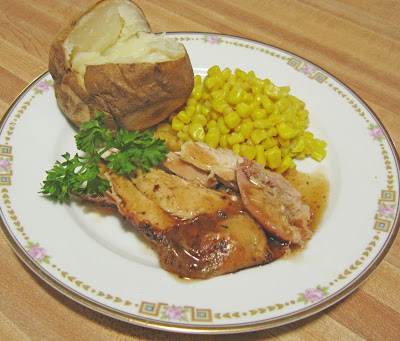 The chicken needs to marinate overnight or at least 4-6 hours before roasting so you'll  need to plan ahead.

Start preparations the night before, or at least 4-6 hours before roasting.  Remove packet of giblets (keep to flavor gravy or discard, as desired), rinse chicken,use a clean paper towel to pat dry.  Massage oil onto outside of chicken.

Combine all spice and herb ingredients to make the rub and then liberally sprinkle and rub mixture outside and inside of the chicken.  Stuff the quartered onion and garlic cloves into the cavity.  Either place chicken in a large resealable plastic bag or place chicken on dish and wrap in plastic.  Place in refrigerator.

There are any number of roasting timetables for chicken, but this is the one that I use.  For my five pound roaster, it took 1 hour 45 minutes to reach 180*F on my meat thermometer.   If you don't have a meat thermometer, you can test for doneness a couple of different ways:  pierce the thickest part of the thigh; the juices should run clear.  Or, wiggle the drumstick; it should wiggle easily.

When the chicken is done, remove it to a platter and let it rest (resting allows the juices to settle into the meat and will help your chicken stay moister).  Reserve the contents that remain in the roasting pan.

While the chicken is roasting, I start the gravy, typically using the giblets to add a little extra flavor, though if you have an aversion, you certainly don't have to, grins. Open up the little bag and toss the contents in a small saucepan with the chicken broth,  a quartered onion, a roughly chopped carrot and a celery stalk, and let it all gently boil until the giblets are done. Strain to remove the solids and reserve the broth.

To make the gravy, the contents left in the roasting pan into a glass measuring cup.  After a minute or so, the fat will rise to the top and should be removed.  You can try pouring off most of it, and use spooning out any remainder; you can also use a slice of bread to sop up any remaining fat, discarding the bread after use.

There will be gorgeous brown bits in the bottom of your roasting dish and those should be scraped up as they are full of flavor.  Because I use a glass roasting pan and am afraid that direct heat will shatter it, I pour a little of the chicken broth into the pan and use a flat whisk to scrape up as much of that concentrated roasted goodness as I can and then return all to the saucepan. Bring to a gentle boil.

In a small bowl or measuring cup, make a slurry with two tablespoons of cornstarch and a quarter cup of water.  Stir out any lumps.  Holding the slurry in one hand and a whisk in the other, continuously whisk the gently boiling gravy mixture and add the slurry in a slow steady stream, stopping intermittently to give the cornstarch enough time to cook and  thicken in between additions. You may not need all the slurry.  If, however,  the gravy becomes too thick, add water and stir; if the gravy is not thick enough, make another batch of slurry and do as before.  Taste for seasoning and adjust accordingly, though I found it perfect as it was.
Katy ~ at Monday, January 18, 2010