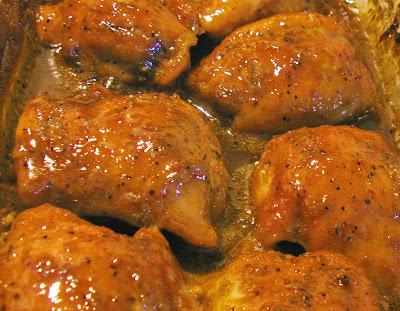 I visit all of your wonderful blogs and see so much delicious food that my must-make recipe folders are literally bulging and bursting. There are recipes that don't make it to my folders, however, and those are the ones that look especially delicious, easy and quick, perfect for those nights when I don't have the time or inclination to spend a lot of time in the kitchen but still want to prepare something nice.

Here's a three ingredient recipe that I think that at first blush many would pass by. However, don't let its simplicity deceive you; it's so simple and so delicious that the recipe has earned its name. I discovered this keeper recipe on Bunny's Warm Oven. Carol, who's an absolute doll and one of three fabulous cooks, posted this on Bunny's Warm Oven. If you haven't visited with them before, I hope you do because, as I mentioned, there are three fabulous cooks, each preparing a recipe for a portion of a meal so that we have the benefit of seeing a whole meal. A trio of delicious recipes in every post!

Preheat your oven to 350 degrees Fahrenheit. Grease a 12 inch x 9 inch pan and set aside, and/or it may be preferable to line your dish with aluminum foil as the sugar tends to caramelize while baking.

Combine and the dried Italian seasoning mix and the brown sugar, mixing together well.

Dip and press the chicken pieces into the mixture, coating front and back and place into your prepared pan, topside of the chicken facing up. Any extra coating that remains can just be sprinkled over the chicken.

Carol says to cook for 50-60 minutes or until chicken is done. I do that as well, but during the interim, I turn the chicken over a couple of times and spoon the resultant saucy melted brown sugar mix over the baking chicken allowing, with the final turn leaving the topside facing up for the last bit of baking. I want to get as much of that flavorful coating as I can.

Carol, I want to thank you again for such a delicious share. I've already made this recipe twice and am looking forward to it again and again!