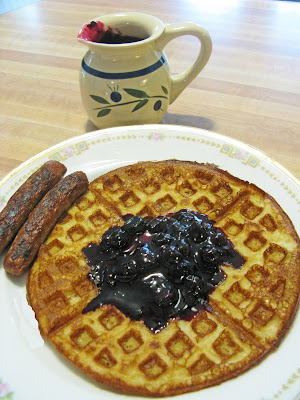 Until these so-light, they-almost-float-off-your-plate sourdough waffles, I have never had good luck with sourdough anything. The minute I saw these on Coleen's Recipes blog though, I just I just had to try again. I had been craving waffles for breakfast, so I took this as an omen.

Excuse me if I speak while my mouth is full, but I must say, "Oh my!" Light, airy, crunchy, slightly tangy, good! Ole Sweetie-Pi, who never eats eats a whole waffle, ate an entire one in record time and declared that we must have this again. 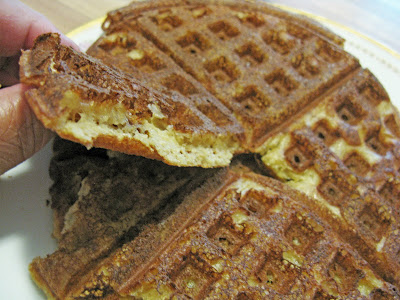 Grins. My waffles are a bit overdone, (Coleen's are far more gorgeous!), but I was hoping to capture the crispy goodness of these. Check our her pictures for a better idea.

Now I just have one addendum to Coleen's excellent instructions. What I didn't consider is that the batter would rise like the sun at dawn. It started to spill out of my pitcher and onto the counter. Fortunately, I was standing in the kitchen when it was just undulating over the sides and I was able to throw the batter into a much larger bowl. The batter does stop rising after a bit, but plan on having a container maybe three to four sizes larger than your starter.

I had some frozen blueberries in the freezer and decided to make wonderful, full of rich blueberry flavor sauce. I declare, this tasted blueberrier than fresh blueberries!

In a small saucepan, combine 1/2 cup sugar, 1 tablespoon cornstarch, a good pinch of ground nutmeg and a dash of salt. (That equates to about an 1/8 teaspoon of nutmeg and even less than that for the salt.)

Stir in 1/2 cup of boiling water; cook and stir until bubbly, about two minutes or so. The mixture will be thick and clear.

Add 1 cup of blueberries and return to boiling. Cook until the blueberries begin to burst and remove from heat. Stir in 1 tablespoon lemon juice. Pour into a serving dish and serve.

This is so good warm and so much better than any store-bought blueberry sauce I've ever had. Makes 1 1/2 cups.