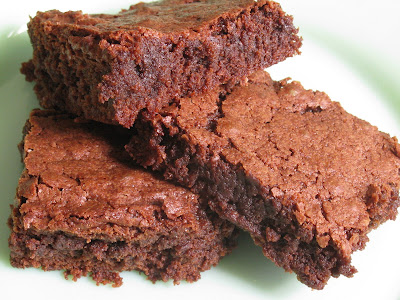 I saw these fudgey-cakey brownies at Gulf Coast Gram's blog and I could not resist them. Just look at their moist chocolaty goodness and they tasted every bit as chocolaty and moist as they look. Plus this has two sticks of butter. How could they be bad?

Melt butter and chocolate together in a sauce pan over medium low heat, stirring occasionally to ensure that the chocolate doesn't scorch.

Once these cooled enough to cut, Ole Sweetie-Pi was there with a huge bowl, a container of chocolate ice cream, and chocolate syrup. I didn't see him again after that (he was hiding from the moochimals, as he calls them, begging cats!) and when it was safe to come out, he later reported that these were the best brownies ever and that this recipe is a keeper.

I ate my brownies, unadorned, undisturbed, while sitting in my little kitchen. Of all the delicious and delightful brownie recipes that are out there, this is the one that I'm calling mine.

Thanks to Anj at Gulf Coast Gram for sharing this!
Posted by Katy ~ at Saturday, July 11, 2009