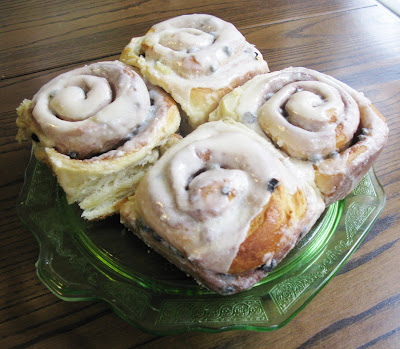 This past weekend I learned a new-to-me Yankee idiom. Apparently, we are having what is described as a "dividing rain." It's a term used to describe the rain that comes between the seasons of summer and fall and heralds the commencement of autumn's rainy season (as if our summer hasn't been rainy enough!). It's generally a week of steady downpours that brings down the autumn leaves before we've had an opportunity to enjoy the full flush and peak of their vibrant colors and beauty. 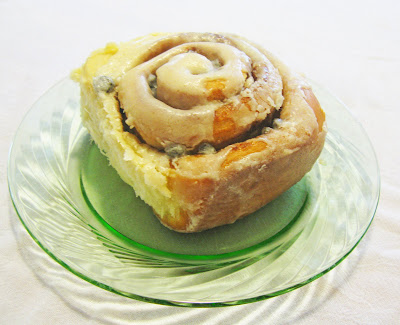 So what do I do to cheer myself up? I bake! I went to our local library and borrowed several cookbooks, one of them entitled 150 Best American Recipes by Fran McCullough and Molly Stevens. I think I want to try virtually every recipe in the book and it's one I'm going to look to buy when I'm next at Border's.

Is it possible to have too much of a good thing? I leave that for you to answer. This recipe will make either 12 or 18 buns. Because I was craving something sweet for breakfast and because I was feeling extravagant and because I don't have two 9 inch by 13 inch pans, I went with twelve buns. As you can see, four buns almost spill over a cake plate, and one bun generously fills a dessert plate. These buns are huge!

You will need a good sized space to roll out this dough (it's rolled into an 15 inch x 20 inch rectangle). The dough is absolutely gorgeous to work with. For those who are familiar with working with yeast breads, you'll know what I mean when I say the dough was soft and silken after kneading.

A frosted cinnamon bun used to be my all time favorite and these buns really are very good. Would I make these again? It's quite likely. This recipe calls for a ton of butter and cinnamon sugar, which I found I did not completely use. I ended up saving nearly a cup of the cinnamon-sugar mixture in a jar to use on cinnamon toast. If you like deadly sweet and gooey then by all means go for it, grins, and use the entire amount. I never thought I'd hear myself say it, but yes, for me, there can be too much of a good thing.

For flavor, I much prefer my Lion House Orange Rolls; they're more work, but are still the best breakfast roll I've ever made.

The directions look long and tiresome, but it's not really not so bad once you get into it. Read through them first, get your ingredients ready, and it all goes pretty quickly, with a little down time in between while the dough is rising to do other morning activities. You'll win smiles and Wows! with these.

Making the Dough
In a small bowl or large cup, combine the warm water, yeast, and one teaspoon of the sugar; stir and set aside.

Add 3 1/2 cups of flour and beat until smooth (it will be like a thick pancake batter). Stir in enough remaining flour until the dough is slightly stiff ~ it will be sticky. More flour will be added for kneading so don't despair.

Turn the dough onto a well-floured surface and knead for 5 to 10 minutes, adding small amounts of flour by sifting flour over the dough as needed to keep the dough from sticking. Once a small, elastic ball has been attained, place the dough in a well-buttered bowl, flipping the dough over in the bowl to lightly coat the dough with the butter (helps with rising). Cover and let rise in a warm place (or place in the oven with a pot of warm water beneath the dough and close the oven door) for 60-90 minutes or until the dough has doubled in size. Punch down the dough and allow the dough to rest for five minutes (this will help to relax the dough to make it easier to roll out). Lightly flour a clean surface and your rolling pin and roll the dough into a 15 x 20 inch rectangle.

Making the Filling
Spread half the melted butter on the dough. In a small bowl combine the 1 1/2 cups of sugar and cinnamon and sprinkle over the buttered dough. Sprinkle the walnuts and raisins if you're going to use them. Roll the dough up, as for a jelly roll, and pinch the edges together to seal.

To cut into twelve near even sizes (grins) I take out my ruler and cut the roll in half. I line up the two halves in front of me, one behind the other, measure, cut the two halves in half (there should now be four rolls of equal size). After that I just eyeball it and cut each quarter into thirds, making 12 rolls. I cup the rolls in my hands to bring them back to a nice circular shape as cutting the rolls can slightly flatten them.

If you're making 12 buns, use the remaining butter to generously grease a 9 x 13 inch pan and an 8-inch pan. If you're making 18 buns, use two 9 x 13 inch pans. Sprinkle the pans with the remaining 1/4 cup sugar. Place the cinnamon buns, cut side down, close together in the pans. Cover and let rise in a warm place until doubled in size, about 45 minutes.

Preheat the oven to 350 degrees Fahrenheit. Bake for 25-30 minutes or until the rolls are a delicious golden brown. Allow to cool slightly before glazing.

Making the Glaze
In a medium bowl, combine the first three ingredients, and then add the hot water, one tablespoon at a time, stirring in between, until you have a spreadable glaze. Spread the glaze over the buns and serve.

An Afterthought: I know that this is already a long post, but I have to share this with you. I'm not going to share the recipe but I wanted to share the picture. Some folks are a little shy about making yeast products. Want to know what I have problems with? No Bake Cookies!! 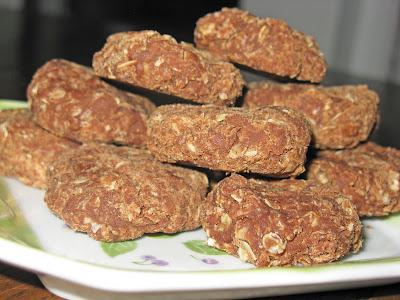 The picture on the post that I saw showed these as beautiful glossy morsels of delight. **Sigh** I think the question that was raised by Ole Sweetie-Pi was "Have we been visited by a giant rabbit?"
Posted by Katy ~ at Monday, September 28, 2009