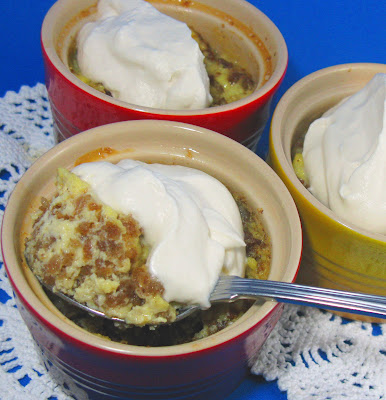 My brother, Grant, gave me a beautiful set of Le Creuset  custard/pudding/baking cups, good from freezer to oven, for Christmas.  When he presented the package, all bedecked in a golden foil wrap, with iridescent snowflakes and a red bow, he was legless with laughter.  He told me that there was a story that went with them, and of course, I,  (being his older, cynical, but not ungracious sister)  assumed that he (ever frugal and pragmatic but still thoughtful in an irascible way) was regifting or bought the gift at a yardsale.  By that time he he was laughing so hard he was gasping for breath, and left me with a package that sat, unopened until Christmas day.  I loved them as soon as I saw them; and when he called to see how much I liked my gift, he was still laughing.  It seems that only one of his daughters wanted this set, and for whatever reason, both his daughters and I received these, plus he bought them at a reduced price.  I guess that makes up for all the times I used to buy both brothers identical (but in different colors) gifts, whether it was clothes or calculators, grins.

Sooo....since I have these really great baking cups, I needed to put them to use right away, and decided on a recipe I haven't had in ages, Grape Nuts Pudding.  It's an old timey recipe, one often associated with New England (though I'm under the assumption that it is enjoyed across this great continent of ours), and one that my grandmother used to make.  I looked in her tattered recipe book; and she had a handwritten recipe for it, but without a comment.  Usually she'd notate that "the family loved this" or some such thought to bring her back to it.  There was no notation, but I tried the recipe and was disappointed.  Guess my sainted grandmother thought if she couldn't find something nice to say, she wouldn't say anything.

One of the best Grape Nuts puddings I ever had was at a little family style restaurant on Court Street in Plymouth, Massachusetts. For the life of me I can't remember the name of the restaurant, probably Pilgrim something or other, but they had just the right Grape Nuts to custard ratio and a sprinkling of cinnamon. And the Grape Nuts were suspended in the custard, not like other recipes I've tried where they all sank to the bottom.

Well, I'll tell you what.  I think I've found as near a perfect recipe as I'm going to.  It's a little gem I discovered on Epicurean.com and I'm loving it.  The ratio of Grape Nuts to custard is a little too much for my taste (the next time I will reduce the Grape Nuts to probably one-half cup instead of the three-quarters) and  I definitely do not use raisins.  Gads, that would be like adding raisins to Indian Pudding.

This recipe is a snap to put together, economical,  and is just a delightful little dessert that's warm and comforting.

Have ready a pan that is larger than your casserole (cassoulets) to hold the dish as hot water is going to be added to the pan.  The pudding will bake in a hot water bath.

In a small bowl, melt the butter and add the Grape Nuts cereal; set aside.

In a one-quart casserole, mix together the sugar, eggs, and vanilla  (I used individual cassoulets so mixed my wet ingredients in a large measuring cup).  Add the Grape Nut mixture.  Add milk, spices, and vanilla.

Place casserole in the pan of hot water, making sure that the water is about 2/3 of the way up the side of the dish.

Carefully place the dish in the oven and bake for 30 minutes.  Stir.  (This is important if you want your Grape Nuts throughout the custard.)

Bake 20 minutes more. Exercise caution because the water the pudding was baked in is going to be hot, remove the pan from the oven.  Remove the casserole dish from the pan of hot water.  Sprinkle pudding with a little additional cinnamon and nutmeg, if desired.  Serve warm or cold.  Whipped cream on top is a very nice touch.
Posted by Katy ~ at Sunday, January 03, 2010