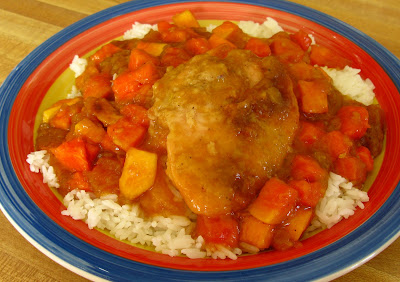 I'm sampling new-to-me foods and recipes in an effort to broaden my culinary horizons so I'll occasionally purchase a fruit or vegetable that is not typically found in my kitchen and find a recipe to go with it.  This week I purchased a papaya.  I like papaya, eating it as I would any melon, but I've never cooked with it, so when I spotted this recipe on Recipezaar with the high ratings I knew immediately what I was going to do.
Hmm....I  have an admitted fondness for fruits and meats cooked together yet  the jury is still out on this recipe.  I liked this, but I didn't really, really  like it, and I certainly didn't love it.. I found the sauce a little too sweet, but I think it's partly because I used dark brown sugar and the light brown would have been a better choice.  I think the breast should have been cut into bite sized chunks and instead of baking, probably just cooked on the stovetop.  I doubled the sauce because the recipe suggested it, if using over rice. It's a  good idea, but I would not double the amount of papaya.  I loved the addition of orange juice to this; it's perfect company for the papaya, enhancing the delicate flavor.
And one last thing, I wish I knew more about spices as I think this could have used something to give it a little more oomph.  Maybe a couple of dried chilis or pepper flakes?
Would I eat this again?  Yes, but I'm going to be a bit bolder and try some spices.  Would I order it in a restaurant, as written, probably not.
Easy Chicken Papaya Chicken Casserole
(Recipezaar #187171)
1 whole roasting chicken, cut up, or 4 chicken breasts, halved, skinless and boneless
1/4 cup flour

Preheat oven to 350* Fahrenheit.  In the roasting pan or baking dish, melt the butter in the oven.

In a small bowl, combine the  flour and salt and pepper.  Dredge chicken in the flour mixture, or alternatively combine the ingredients in a plastic bag and shake until well combined, and add chicken to coat.

Remove dish from oven and dip the chicken in the melted butter, with the buttered side up.

Bake for about one hour or until chicken is tender when pierced with a fork and juices are clear.

When done, drain fat, reserving chicken, and place chicken back back into the baking dish.

While the chicken is baking, prepare the sauce.  Combine all ingredients, except papaya, in a medium sized sauce pan and bring to a gentle boil, stirring.  The sauce was thicken and become clear.

Add the papaya to the chicken, pour the sauce over all, and bake an additional five minutes to heat the papaya through.