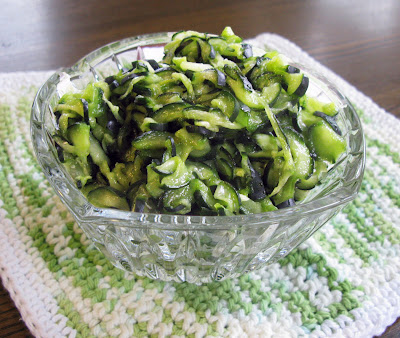 My mother was real big on pickles. She said when she was pregnant with me, she wept many tears with craving for two particular Japanese pickles she particularly loved and missed, pickled plums and pickled olives.  It was until I was in my early 20's and went to Boston to an Asian food mart that I was able to find her heart's desire and mailed them to her.  In the meantime, she did a lot of canning from the huge vegetable garden she kept, and  harvested bushel baskets of cucumbers from which she made bread and butter pickles, ripe cucumber pickles, and relishes. I used to butter bread and make pickle sandwiches they were so good!

Recently my brother Grant asked me about Mom's cucumber salad, if I knew Mom's recipe and did I make it.  We both recalled the nice sweet and sour flavor, slightly crunchy texture,  and to me (and apparently to Grant) totally addictive and memorable.  Once we start on these, we both claim we can eat the whole bowl by ourselves.

Wash the cucumbers. Cut off the ends.   Remove the peel with a paring knife or vegetable peeler, leaving strips of green peel for a striped effect.  Cut the cucumbers in half lengthwise.  Using the tip of a spoon, remove the seeds.  Slice the cucumber as thinly as possible (across the narrow side, so that you'll have half-moon shaped slices of cucumber) into a bowl.

Add the salt, and with your impeccably clean hands, mix the salt and cucumber mixture with your hands until the cucumber slices are limp and opaque looking.  This will take 4 or 5 minutes. Cover and set aside for 45 minutes to allow the salt to draw out the cucumber liquid.

In the meantime, mix the lemon juice, sugar and vinegar in a separate bowl.

Transfer the cucumber mixture to a colander and squeeze out as much juice as possible.  My mother used to wrap the cucumbers in a clean white linen dishtowel and squeeze and twist the towel to remove the liquid, which is the way I do it.  Discard the salt water. Put the cucumbers into bowl.  (The volume will be greatly decreased from the amount you initially started with.)

Add the lemon juice, sugar, and vinegar mixture to the squeezed cucumbers.Add sesame seeds if using.  Let sit for an hour or so, refrigerated, and then enjoy!

I am submitting this recipe to Lynda  for April's Family Recipes.
Posted by Katy ~ at Friday, April 16, 2010