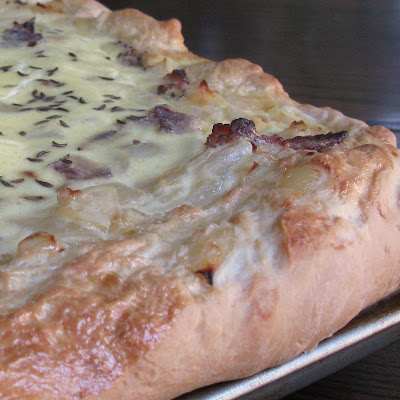 I originally saw  this recipe some while back in one of my Mennonite/Amish cookbooks and then was delighted to see it on the Good Morning America Website. It was presented by the esteemed and inestimable Julia Child.  It has been haunting me since I first read about it. 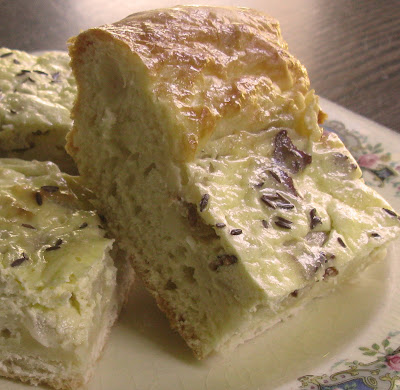 Reviews of similar recipes on Allrecipes.Com  and Recipezaar gave this recipe glowing remarks of how rich it is and that it's a new family favorite and so on.  I could barely wait to take my first bite.  The aroma of this while it was baking was mouth watering and we were filled with anticipation.

After all that, can you believe that neither Sweetie-Pi nor I really cared for this?  It seemed to us to be seriously lacking in flavor.  I used full fat sour cream (low fat can sometimes translate to low flavor), but perhaps a different brand?  I used yellow onions, but perhaps Vadalias would have been better?  One thing is for certain, the amount of salt called for in the dough was not enough  for our tastes, but then, I  confess I used only used regular table salt, so perhaps the sea salt has a deeper, saltier flavor. Aside from that, the crust was delicious.  It's thick, bready, buttery, and reminds me of the softer type crusts used for thick pan pizzas, and indeed that is how I intend to use this recipe in the future.

I really want to like this and I'm not willing to give up on it, smiles, because I think it has the potential to be all that I imagined.

Proof the dry yeast in the lukewarm water in a small bowl or two-cup measure.

Sift the flour and salt into a deep bowl. Add the butter and rub the mixture through a sieve or colander to form a fine crumb or process it in a food processor.

Make a well in the center of the crumbs. Beat the egg yolks into the yeast and pour into the well in the crumb mixture. Stir and work into a stiff dough. Knead 5 to 10 minutes on a well-floured work surface until the dough is soft and spongy and no longer sticks to the fingers.** Cover and set aside in a warm place to rise until doubled in bulk (about 1 1/2 hours).**

Preheat the over to 375 F. Fill the crust with the pie filling as directed and bake for 40 minutes or until the filling is set in the middle and the crust is golden brown.

Note: Any sort of pie filling may be baked in this crust as long as the volume of the prebaked filling does not exceed 1 to 1 1/2 qts.

While the dough is rising, put the onions and the oil or butter in a heavy skillet, cover, and sweat over medium heat until soft and beginning to brown (about 15 minutes). Fry the bacon in a separate pan until golden, then drain and reserve. Preheat the oven to 375 F. Press down the raised dough and roll it out to 1/4-inch thick.** Line a baking pan measuring 8 1/2 x 14 inches with the dough.

Roll the edges of the dough down and tuck under to form an even rim about 2 inches high along the sides. Let the crust recover for about 15 minutes, then spread the cooked onions and bacon evenly over the bottom.

Beat the eggs until lemon colored, then combine with the sour cream. Spread over the onions, then scatter caraway seed over the top. Bake 30 to 40 minutes or until the filling has set and begun to turn golden brown on the surface. Serve hot or at room temperature.

**I used regular table salt and found that the bread was bland; I would increase the salt to at least one teaspoon if your not using sea salt.
**In my estimation this dough was very sticky to work with and required at least another 3/4 to 1 cup of additional flour to make it easier to work with and knead.  My kitchen was quite warm on the day I made this dough, and the dough only took 1 hour to rise.
**I did not roll the dough out (because it is sticky to work with). After punching it down, I let it rest for five minutes or so, and  I greased my cookie sheet, and pressed and pushed the dough into place, like a pizza dough, allowing it to rest again, then proceeded with adding the toppings.