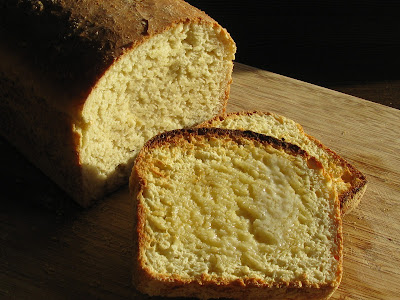 I woke up Saturday morning with every intention of making Eggs Benedict for breakfast but first I wanted to make an English muffin batter bread.  I rely on a favorite recipe from King Arthur Flour, and when I goggled it, I saw that they had another version, this time using instant yeast and not active dry yeast.  Immediately I was intrigued, and as I have both types of yeast in bulk, on hand, I chose the (new to me) version.
Let's just say that the Eggs Benedict were never made.  The aroma of the freshly baking bread woke up Ole Sweetie-Pi from a heavy sleep, and he came downstairs to see what all the good smells were about.  He virtually pounced on the still steaming loaf as I set it on a rack to cool, cut two thick slabs, toasted them, and slathered on melting butter.
English Muffin Toasting Bread
(King Arthur Flour)
Makes one 8 x 4 loaf
3 cups all purpose flour
1 tablespoon sugar
1 1/2 teaspoons salt
1/4 teaspoon baking soda
1 tablespoon instant yeast
1 cup milk
1/4 cup water
2 tablespoons vegetable oil or olive oil
cornmeal, to sprinkle in pan

In a large bowl, combine and whisk together the flour, sugar, salt, baking soda, and yeast.

In a microwavable container for your microwave or using a small saucepan  for your stove top, combine the milk, water and oil.  Heat until temperature reaches 120*F to 130*F.  Add the wet ingredients to the dry ingredients.  Beat at high speed for one minute. (see my note)

Scoop the dough into the pan, and level as best as you can, you may have to pull or stretch it a bit.  Cover the pan and let rise in a warm place about 45 minutes to an hour, or until the dough rises approximately 1/4 inch over the rim of the pan.  Remove the cover.

Preheat your oven to 400*F and bake the risen dough 20-22 minutes, until it's golden brown, sounds hollow when it's thumped, or has an internal temperature of 190*, if you are using a thermometer.

Remove the loaf from the pan and place on a rack and allow to cool thoroughly.

**Note
The recipe at the KAF website describes this dough as soft and scoopable.  This was not my experience and as a result mixed the dough with a large spatula and quickly kneaded it. There was no way I was going to be able to use a mixer for this dough without burning out the mixer's motor, smiles.  I read through some of the comments by other reviewers and saw that someone else had the same experience and the response was that perhaps too much flour was used because the baker just scooped the flour, not fluff and sprinkle and level into their measure.  Guilty.  I scooped and leveled, but did not aerate the flour first by fluffing it and sprinkling the flour into the measuring cup.  Live and learn.  Bread was still good though, smiles.
Posted by Katy ~ at Sunday, October 31, 2010