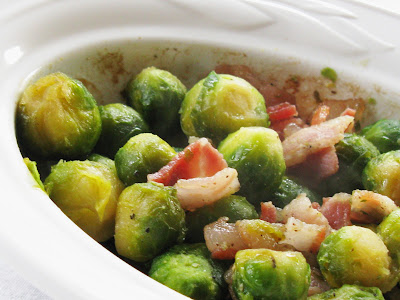 Have you ever mentioned that you didn't like something, say Brussels sprouts, and that person would listen thoughtfully and say with great self-assurance, "Well, you'd like the way I make it."  ﻿

I have yet found that to be true.  There is no way you can pretty up tofu or okra, for example, and make me believe that I like it.

Ole Sweetie-Pi loves bacon.  He loves maple syrup.  He positively loathes Brussels sprouts.  There is not enough bacon or maple syrup on the planet to make him think he is going to eat  those gorgeous green globes of goodness.  Me, however, I love them, and I really loved them served like this.  The maple syrup added just a perfect amount of sweetness, and who doesn't love the salty goodness of smoked bacon.  Total YUM!

I found this recipe on the Boston Globe  and as far as I'm concerned, it's a keeper.

Preheat oven at 400* Fahrenheit.  Have a large rimmed baking sheet (cookie sheet) on hand, set aside.

In a large bowl, toss the Brussels sprouts with the remaining ingredients and spread the mixture in a single layer on the baking sheet. (It might be helpful to line with a sheet of tin foil for easier cleaning afterwards.)

Roast for 25 to 30 minutes, turning several times, or until they are tender and caramelized and the bacon is crisp.

NOTES:  I made this for Thanksgiving Day, and because I have only one oven and was using it for other baked goods as well, I did not "roast" at the suggested temperature. I just put the ingredients (minus the salt as I felt the bacon would be salty enough) in one of my oven to table dishes and baked at 350* Fahrenheit for 45 minutes, along with other dishes I had going.  I did not get the deep caramelized color or the bacon crispy, but the wonderful flavors where there, and I was able to have everything ready at the same time.
Posted by Katy ~ at Saturday, November 27, 2010