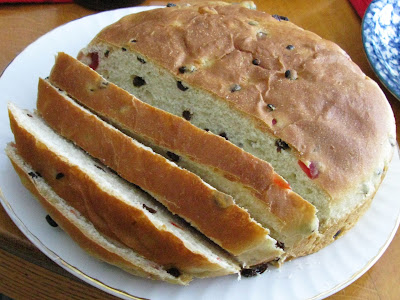 Sweetie-Pi's sister Susan is dating a man of Norwegian heritage.  Lloyd is a gentleman of courtly old world manners and demeanor, and when I say he is one of the sweetest men whom I have ever met, I do not exaggerate.  He is gracious and soft-spoken and a pure delight. When he smiles, his blue eyes sparkles and you can feel his heartlight beaming bright.   So when we were invited to their house for Christmas for an overnight stay, I wanted to do something a little special with him in mind.

I am not familiar with Norwegian cooking and I do not have any friends who are either, so I had to rely on the internet.  As I often do, I turn to Allrecipes.com where recipe reviewers rate the recipe and often add a personal note of an ethnic recipe's authenticity.  A couple of reviewers said this recipe was much like the one in their own family archives, so I was encouraged and heartened to try.

My, my, my is this good.  Cardamon was an unknown spice to me (mainly because it can be expensive and it is not used in the typical recipes I make and I didn't want to invest in a spice that I was unsure I'd enjoy), but now I am addicted to it.  It is fragrant (almost flowery, but not) and sweet (unlike cumin or turmeric which I consider to be savory and hot).  The bread has a nice sweetness to it, but is not cloying. 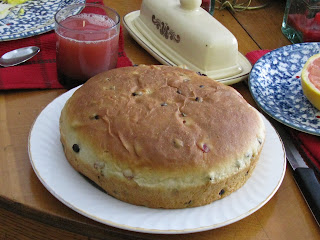 You can see from this picture that this is not a tall loaf, and that initially troubled me, but once I stopped to consider that these loaves are made in a cake pan, I realized that they should be above even with the tops of the cake pan when fully baked.  Also, the directions say to allow the bread to double, approximately one hour, at both rises.  On the second rise, the bread had not doubled at the end of one hour, and I actually let it rise for two hours.  It still didn't really double, but I put it in the oven, and it finished rising as it baked.  I think the added weight of the fruit slowed the rising.

And what did Lloyd think.  Well, he took a slice and ate it.  Asked for a second slice and ate that.  He took a third slice.  "Reminds me of my mother," he said.

In a mixing bowl, dissolve the yeast in warm water.  Add the sugar, egg, butter salt, and cardamon and 2 cups of flour.  Mix well.  Stir in enough flour to make a soft dough.  Add the raisins (currants) and the citron.

Turn onto a floured surface; knead until smooth and elastic, about 6-8 minutes.  Place dough in a greased bowl, turning once to grease the top.  Cover and let rise in a warm place until doubled, about 1 hour.

Punch dough down; divide in half.  Shape each portion into a flattened ball and place one ball in each of two greased 9-inch round baking pans.  Cover and let rise in warm place until doubled, about 1 hour.