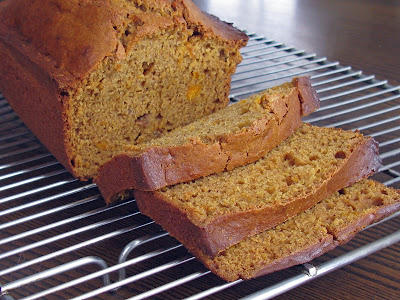 I used to be the only one here who ate sweet potatoes, that is, until I made this sweet potato bread.  My, my, my is it good!  It's very similar in taste and texture to a pumpkin bread, and if you didn't mention it, I suspect no one would be the wiser.  The recipe makes two loaves (with the typical hump in and the crack running down the middle of it).  It may not be pretty on the outside, but it is beautiful on the inside.

Ole Sweetie-Pi had a recent stayover at his sister's and boyfriend's home, and I packed up some goodies for him to tote along, and a loaf of this was among them. There was some initial skepticism but then  I received phone calls and emails the next day telling me how much they all loved it.  When Ole Sweetie-Pi came home, he had to reassure himself that we still had a loaf for ourselves.

Original recipe is on Allrecipes.  This is my adaptation.

Prepare the sweet potatoes by first washing them. Then you have a couple of options.  I pierced three big sweet potatoes and microwaved them until soft. Or you can slice them lengthwise and place on a lightly greased baking sheet and bake at 350*F for about 30 minutes, or until soft. Allow to cool, peel, and then mash and set aside.

In a large mixing bowl, mix together the sugar, eggs, oil and applesauce.  Stir in the orange juice and the mashed sweet potatoes.

Divide the batter between two generously greased 9" x 5" loaf pans.  Bake in a preheated 350*F oven for about 1 hour and 15-25 minutes or until golden brown and a toothpick inserted in the center comes out clean.
Posted by Katy ~ at Sunday, February 27, 2011