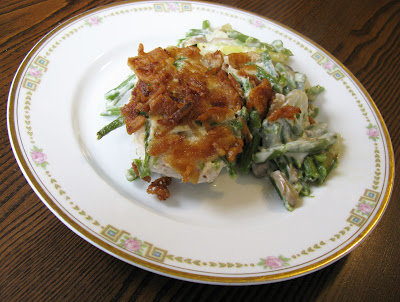 This recipe is a spinoff of the perenially popular green bean casserole.  For not a lot of money you can feed a family a meal that is filling and delicious.  I can't tell you how many times my own mother made this when the pantry was getting a little lean and the wallet a little thin. We thought we were dining like rich folk.

Essentially, I just threw together ingredients for a green bean casserole, added sliced potatoes, and a couple of chops, a small can of mushrooms (fresh is so much better if you have them!), some sour cream, and baked.  For the two of us, I used only two chopsyou can easily add more chops. This made a generous amount of casserole, which we enjoyed as a leftover.
Green Bean and Pork Chop Casserole
2 medium potatoes, washed, thinly sliced, skins left intact if desired
1 can cream of mushroom soup, plus one half can of water
1 small can sliced mushrooms, drained
a good-sized gob of sour cream, probably about 1/2 cup
2 cans green beans (also known as haricot verts)
2 thin boneless pork chops, browned
salt and pepper to taste
generous handful of French fried onions
Preheat oven to 350*F.  Generously butter an 11 inch by 7 inch baking dish (or a 9 inch by 13 inch baking dish if using more than 2 chops).
Wash and peel your potatoes, and then slice to about 1/8 inch thick.  To prevent browning,  put them in a bowl of fresh cold water. Set aside.  (Dry them off with a paper towel before using.)
In a separate bowl, combine the mushroom soup, water, mushrooms, and sour cream.  Add the green beans and mix to combine. Set aside.
Lightly salt and pepper the pork chops + and brown in a fry pan, about three minutes each side.
In your baking dish, layer the sliced potatoes.  Top with one half of the green bean mixture.  Add the browned pork chops, and top with the remaining green bean mixture.
Cover with tin foil and bake at 350*F for about 50 minutes.  Remove from oven, peel back aluminum foil and insert the tip of a knife to the bottom of the casserole, testing that the potatoes pierce easily and are done. If not, cover and return to the oven and bake until done, probably another 10 minutes or so. When potatoes are done, completely remove the foil and sprinkle with the French fried onions and return the casserole to the oven.  Bake for an additional 10 minutes to brown the onions or until the onions are a deep golden color.
Remove casserole from oven.  Let rest a couple of minutes, serve hot.
Posted by Katy ~ at Tuesday, May 03, 2011