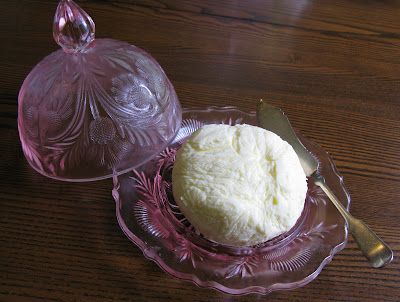 Depending on which family member you talk to, we were (or we were not) fortunate enough to have a couple of farm animals: a cow, pigs, chickens, ducks, a goat at one point, while we were growing up. The Guernsey cow, Bossy, was my responsibility.  I milked her twice a day, cleaned out her stall, talked to her.  She would moo, look soulfully at me with her big deep brown eyes, and was ever so patient and gentle.

I'd bring the big stainless steel pail of steaming, foaming milk, trying not to slosh as I carried it with both hands in front of me to my mother who would take the pail to strain the milk through cheesecloth.  Into the refrigerator it would go and overnight the milk and the cream would separate, the cream rising to the top.  She'd reserve the cream to make cottage cheese, or my favorite, butter.  I can't stand the flavor of raw milk, I don't like ice cream made fresh on the farm (it all tastes the way a barn smells to me, yuck!) but creamy, pale yellow butter rises above all that. Mom would make loaves of homemade bread or dinner rolls, and I'd have a little bread with my butter.  Lawsy mercy, that butter was food for the gods.

I had a quart of heavy whipping cream that I wasn't going to use for it's planned purpose (and with the exorbitant price of groceries, I am not going to throw it away!!), so I decided to make butter.  Just like Mom's. The funny thing is, I don't remember my mother making butter.  For the life of me I can't picture it. I just remember it being on the table in a covered butter dish.  It was a white ceramic chicken with a red comb sitting on a white ceramic nest.  No, I don't want one.

Sooooooo, I had to do a little research, and believe me when I tell you, there's probably nothing easier that you can do that will yield such delicious results.

This is not a recipe, so much as a method.  You can use virtually any amount of cream so leftover heavy cream will never have to be wasted again.   And an added plus?  The liquid that is extracted as you whip the cream is real buttermilk, and can be used in any recipe that calls for it.  Cake, scones, buttermilk chicken, fried green tomatoes....oh the luscious uses of buttermilk.

A pint or more of fresh heavy cream or whipping cream , either will work fine
Pinch of salt, if you want your butter salted

Put your cream in the bowl of your mixer or in a bowl large enough to hold the cream (plus room enough for expansion as the butter starts to take shape.), whip the cream. That's it!

Mix at medium speed; it's the same as if for making whipped cream except you are going to go way beyond the stiff peak stage of whipped cream.

Once you get past the whipped cream stage, the cream is going to look curdled.  That's fine; it's supposed to, because now the cream and the buttermilk are beginning to separate.

Things might get a little messy here, you may want to find a way to cover your bowl with plastic wrap while you continue to whip the butter.  I didn't run into this, but others do.  (It may be because I used a deep V-shaped mixing bowl so the heavy butter stayed at the bottom.)

Once it looked really curdled, I strained the butter/buttermilk through a  fine mesh strainer and then a double layer of cheesecloth into a container.  It takes a bit of hand strength to do it, but you want to get out as much of the buttermilk as possible.  The butter squeezes out of the cheesecloth, but I don't know of another way to do it, so you'll have to scrape some butter off the cheesecloth if your frugal, as I am, smiles.

I put my now-lump-of-butter into the bowl I whipped the cream in, and rinse the lump under cold running water.  I want to rinse out as much butter milk as possible because removing the buttermilk will help to preserve the butter.  I smoosh the lump around a bit until the water runs clear.  If you are really particular about this, you can use a large wooden paddle and press the butter against the inside of a bowl to remove any extra liquid.

Refrigerate!  The entire process probably took only about 15 minutes, but I was a little fumble fingered with all the squeezing of the butter in the cheesecloth, so it may take you less time.

Looks like a lot of instruction, but it's not, honestly.  Whip the cream, strain the buttermilk out, rinse the lump of butter, add salt at this point if you are going to use it.

With one quart of heavy cream, I had 11 ounces of sweet, creamy butter and 2 cups of buttermilk.  Is it less expensive?  Yeeessssss and no.  A pound of store bought butter is running about $3.59 and that would be the store brand; the national brands are closer to $4.00. I would have to take out a second mortgage on my house to buy the European butter.   The quart of cream probably cost me just under $4.00 and it only gave me 11 ounces of butter.....but I did have 2 cups of buttermilk as a by-product that I didn't have to purchase separately and will now use in other cooking projects.  So, yes, it's worth it to me.
Posted by Katy ~ at Monday, August 08, 2011