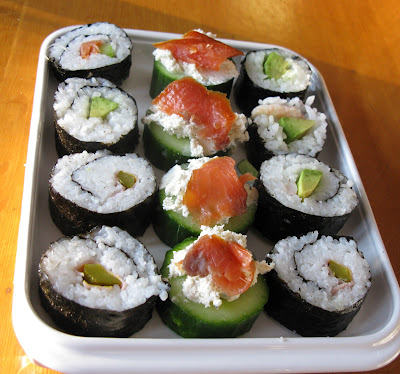 I have a dear, sweet family member, Liz, Ole Sweetie-Pi's youngest daughter, who is allergic to all kinds of foods:  wheat, dairy, soy, corn, white potatoes, beef, peanuts, almonds, some fruits...poor thing. And doggone, doesn't corn syrup show up in a ton of  processed food, same with gluten in its many disguises.  I don't know what's left.  Rice, beans, fish, some vegetables, some fruits,  sweet potatoes.   When it's time for family gatherings it's a challenge to find food that is delicious as well as belly friendly.

I remember my mother making sushi when my brothers and I were children.  She had the sushi mat and she'd have rolls made in no time.  And boy, did I love them.  Hers were very simple, just nori,  sushi rice, deli ham and sliced gherkin pickle.  We'd eat them as fast as she could make them.  When I went to make my own sushi, I was concerned about rolling the sushi, but there's absolutely nothing to it.  If you've ever rolled dough for cinnamon rolls, made a jelly roll, or even rolled your own cigarettes (okay, just looking and seeing if you're paying attention with that last one), you shouldn't have any kind of trouble.  You don't even need a sushi mat ~ a plain white linen dish cloth covered with a piece of plastic wrap will serve you better than good.

I have to smile.  Sushi is an acquired taste; it's the idea of dried seaweed that throws off a lot of people and the fear that the sushi has raw fish in it.  Let's just say that at Ole Sweetie-Pi's family gathering, this was not a huge hit, even the sushi that did not have the salmon in it, with only three of us trying various selections.

The recipe I'm going to share with you is for the sushi rice only, but for the "stuffing" you can put together any combination of ingredients you think would be delicious and complement the sushi rice.  Try not to overstuff because you need to roll the the nori/sushi rice/filling.  I made three different flavors:  diced avocado and shrimp; sliced deli ham and gherkin pickles; smoked salmon and sliced, peeled English cucumbers.  Because I had a ton of the cucumber and salmon left over, I sliced the cucumbers into discs, put on a dollop of herbed pub cheese  and topped with a couple pieces of smoked salmon.  Served on a tray, it made a tempting, delicious presentation, I think.

Place rice into a large, deep bowl. Fill with cold water and rub rice together with hands until the water turns milky white. Pour off the cloudy water, being careful not to pour out the rice. Repeat 3 or 4 times until you can see the rice through 3-inches of water.

Drain the rice in a fine strainer, then place into a saucepan with the 3 cups of water. Allow to stand for 30 minutes. Cover; bring rice to a boil over high heat; then reduce heat to low, and simmer for 15 minutes. Remove from heat and allow to stand for 5 minutes.

In the meantime, while the rice is cooking, stir together rice vinegar, sugar, and salt until dissolved in a small bowl, set aside.

Scrape rice into a bowl. Stir in vinegar mixture until well incorporated and no lumps of rice remain. Allow to cool at room temperature.

MY NOTES:  Lay out your impeccably clean white linen (not terrycloth!) dish towel.  Lay a piece of plastic wrap over that.  Open up your package of nori and lay the nori on the plastic wrap.  The nori is a small square and fragile.  Using wet fingers, spread about 3/4 cup of the sushi rice evenly over the nori square, leaving no bare spots, going to three edges, leaving about a half an inch or so at the far end without any rice.
The rice is pretty sticky, so you'll probably want a clean bowl of water and towel to rise off your fingers as you work.

At the end closest to you, lay out what you want your filling to be.  Small slender slices work best and make the most attractive presentation as well the easiest to eat and enjoy.  At this same end, gently begin to roll, using the plastic sheet to raise and roll the nori/rice over and then under the filling.  Tug the plastic out from underneath the nori roll if it's caught underneath and raise the plastic sheet again, rolling the nori over, using the plastic sheet to help you form the roll, gently using your fingers pressing and forming,  keeping everything together.  It's not difficult, you can do it!
Posted by Katy ~ at Sunday, February 12, 2012