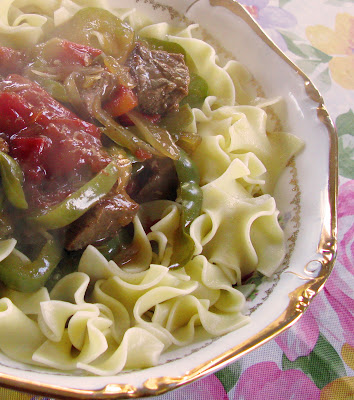 The mother of a former sweetheart of mine used to boil her steak, regardless of the cut, until it was grey, slice it and serve it. It was chewy and unappealing.  I grew up in a household where steak was fried.  The first time I ever had a roast beef, I was 18.  I can still remember my husband and I taking my mother and two younger brothers out to dinner in a nice middle class restaurant.  My oldest brother saw roast beef on the menu and his eyes lit up; roast beef sounded so fancy.  He proudly placed his order and when the waitress asked him how he'd like it done, he stumbled, looking confused and abashed,  and said, "Fried, I guess."

I needed a recipe for beef tips and when I found this recipe I was prepared not to like this, mostly because of the way the beef is prepared ...simmered  until tender, even if it was with other delicious flavors.   However, I needed something quick and easy, something a little different than I normally serve, with items I had on hand.  Gosh, this was good.  Ole Sweetie-Pi, the beef lover, gave it two hearty thumbs up. 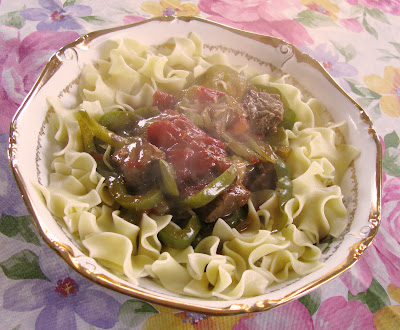 ﻿This is a good recipe if you're trying to cut back on meat.  With one pound of beef, you can serve four people. You're going to have to like the flavor of green peppers, though.  It's a predominate flavor along with the stewed tomatoes.  The recipe calls for cutting the peppers into rings, which makes for a nice presentation, but not so easy to eat. I'd be inclined to save a couple of rings for decorative purposes and cut the peppers into large chunks.  Same with the stewed tomatoes.  I threw the can in whole, but next time will cut the tomatoes into at least halves if not fourths.

Leftovers were very good.  The noddles had a chance to absorb some of the broth and I think I liked this even more the second day.

Heat the oil in a skillet over medium low heat.  Add the beef and brown, about 15 minutes.  Add the onion and garlic and season with the salt and pepper.  Add beef broth to the meat and cover and simmer over low heat, about 25 minutes, or until meat is tender.  Add the tomatoes and green pepper; cook 10 minutes longer.

In a small bowl or measuring cup, combine the cornstarch, water, and soy sauce.  Stir well to make a slurry.  Add to the meat mixture, stirring constantly, about five minutes to thicken the sauce.  Add a pinch of sugar if desired.  Adjust seasoning.

If sauce is too thick for your liking, add a small splash of water and stir.  If it's not thick enough, make another batch of slurry (just water and cornstarch) and add in small amounts, allowing it to cook in between before adding more  to determine how thick the sauce is going to be.
Posted by Katy ~ at Wednesday, April 25, 2012