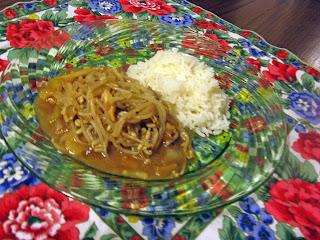 I never had the good fortune to meet Sweetie-Pi's mother. When speaking of her, everyone I've ever met who knew her, gets that far away look, reminisces with a far away smile and begins describing her, "She was the grandest lady...."

When was the last time you heard a woman described as a lady? It's an old fashioned word with deep connotations. Sweetie-Pi's friends go on to describe her as elegant, fun, beautiful, gracious, loving, welcoming. But they always start out saying, "She was the grandest lady.... "

This recipe was prepared by Sweetie-Pi's mother decades ago. I'm fortunate enough to have her recipe card, written in her own small, well-formed printing. The recipe, like her, is something to remember. It's my pleasure to share it with you as she wrote it.

Heat shortening and fry meat, celery and onions for 5 minutes. Then add sugar, soy sauce, and water. Cover and simmer 10 minutes. Add bean sprouts, season with salt and pepper. Thicken with flour and cook 10 to 15 minutes.

Now let me add my own remarks. I've only made this with chicken. I think two tablespoons of soy sauce is not enough; I probably give the soy sauce at least a couple more hearty shakes. (Sweetie-Pi adds more at the table but he has those salt-craving taste buds.)

I make a slurry of the flour and water to remove any disagreeable lumps. If the sauce is too thick, either add a couple more shakes of soy sauce or a splash more water. Conversely, if it looks too thin, make another small batch of slurry, (a couple teaspoons of water to a quarter cup of water). Add carefully, stirring well in between, giving the flour an opportunity to do its job.

We also add a small can of drained water chestnuts. I don't like them and pick them out, but Sweetie-Pi loves them. And lastly, I do not cook for 10-15 minutes at the end. I like my vegetables tender crisp, so once the sauce has thickened, I might let it go another minute or two, but I consider it done.