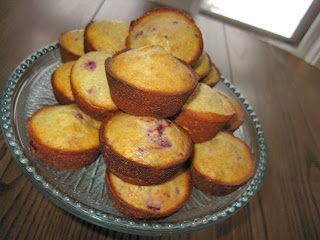 When I arose this morning, the sky was heavy with leaden clouds, the air was cold damp, and our five cats were acting all crazy, erupting from corners, chairs, and tables, chasing each other. Snow was sure to be imminent.

I've had raspberries in the freezer for a little while and thought it would be a nice treat to make raspberry muffins. I bet I have close to a hundred cookbooks and not one of them had a raspberry muffin recipe in it. Can you believe that? Me neither. I think I need another cookbook!

A quick search, and I found this gem on RecipeZaar. I cannot tell you how much we enjoyed these muffins this morning. Ordinarily I would wait to post, but these were so good I just had to share it with you as soon as I could! 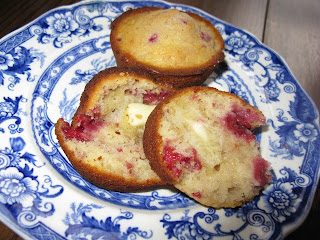 Now the directions say to use the paper cupcake holders, which I did not do; I rarely use them. I have an unattractive trait called arrogance which too often prohibits me from taking good advice. I don't like paper cupcake holders because I think only cooks who are too lazy to do a good job greasing their pans or to take the time necessary to wash the the muffin cups after use them (I also have a thing about lazy people.) Whatever; as I said, arrogance.

If you look closely at the photo, the outside of the cupcakes are a little too brown, I think. In this instance, I believe the paper cupcake holders would've prevented their overbrowning and made for a prettier presentation.

The heating of the milk with the lemon, butter and vanilla and zest is positively inspired. I wish you could've smelled the aroma of the lemon zest as it infused the milk (I didn't have orange). The wonderful, citrusy aroma woke up Sweetie-Pi and brought him downstairs to see what was smelling so exquisitely good.

These muffins are light, full of tart raspberry flavor with a nice balance of lemony goodness. Perhaps rolling the raspberries in a little sugar before adding to the batter would be good, for those who have sweeter taste buds.

This recipe made 18 standard sized muffins for us, filling the muffin cups half full.