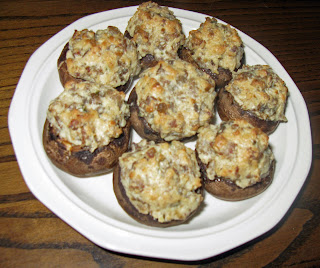 Tonight was a movie night for Sweetie-pi and me. We're addicted to a British who-dun-it series called "Midsomer Murders." Proper English manners, beautiful estates, sweeping English countryside, innuendos, murder, suspects galore, what more could we ask for. It's so tasteful and proper --can murder be proper?
Anyway, it's not a real movie night without some sort of tidbit, and since we didn't have a proper (there's that word again) lunch, I made something with a little more substance. I made Stuffed Mushrooms with Cream Cheese and Sausage. They work up pretty easily, and they look a little festive and fussy, which they are not (fussy that is).
I followed the recipe as written, with the exception of adding maybe 1/4 to 1/2 cup of Italian bread crumbs. I just eyeballed it and stirred, then tasted for texture and flavor until I thought it was enough. Then with my impeccably clean, damp fingers, I smoothed and patted the stuffing in and on the mushroom caps. (My fifth grade teacher, Miss Williams, always said that neatness counts. I've always remembered that, but I think in her case she was referring to my handwriting not stuffed mushrooms.)
I'm going to be honest here. I thought these were just okay. However, Sweetie-pi swears they're the best stuffed mushrooms he's ever put in his mouth and that they are party worthy! They are very rich, he says. He can only eat a few, he says. Oh? An accolade from a man who only likes iceberg lettuce? The day can't be more gratifying, I think.
Unless I figure out who-dun-it early on in the movie. Now I feel complete.
Posted by Katy ~ at Thursday, January 29, 2009