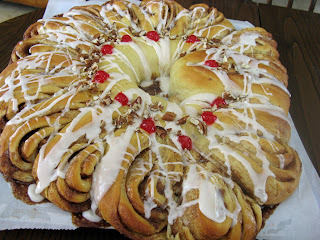 I never thought I could do it, but here it is! A tea ring made in my very own kitchen. I've admired them in bakeries and have long wanted to make one. I never believed that I could. 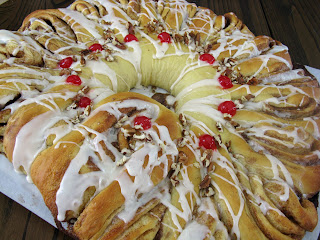 Now, I have some cooking experience, but I am timid when it comes to anything I perceive as fancy. Tea rings with their beautiful twists looked too complicated. However, after reading the how-tos, I decided to cast my fear and insecurity aside, and go for it. 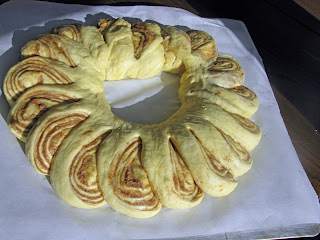 I found a cinnamon roll recipe that I've been wanting to use for a while, and decided to try it as a tea ring. I didn't care for the frosting, so I used this frosting. So far, so good, right? Yes. Well. Maybe.
The dough is very wet and additional flour has to be added judiciously. Thank heavens the blogger said that the dough was sticky. I was about to give up in despair until I reread the directions and saw that fine detail. Sticky, okay; wet, not okay. The dough smelled divine with the addition of the vanilla pudding. YUM! My confidence was rising with the dough.
What I didn't see (all right, I saw it, but the words didn't sink in) was that the recipe made 24 LARGE rolls. I dismissed that detail, thinking that more dough would be needed as it was going to be in a ring. That all changed, however, when I saw how big the roll actually was on the cookie sheet. I mean, it nearly took up the entire sheet, and it wasn't even on its second rise.
I debated about making two rings and finally decided that might make them too small. After the second rise, the dough was right to the very edge of the sheet. I patted it back. I should've gone with my first instinct and made two rings. I forged ahead and put it in the oven. Set the timer. Okay, next time I'd make this into two rings. Not a big deal. Lesson learned.
Then the oven started smoking. I mean, smoking! The dough was slightly dripping off the edges of the pan, melted butter and cinnamon were charring on the oven floor. I raced around and opened a door to let in freezing cold air so that the five cats and I wouldn't asphyxiate. Thank heavens Sweetie-Pi was downtown; he can be so endearingly excitable at times. I'm pretty sure there would've been a fire extinguisher involved somewhere and frantic rushing about. I'm much more calm than that -- no flames, no fire extinguisher.
So, the timer goes off, it looks all nice and golden brown. The house didn't burn down. I make the frosting and decided to go with just a drizzle as there is so much sugar already. The flavor? Both Sweetie-Pi and I agree that this is recipe is a winner. The rolls are so light and fluffy; they almost melt in your mouth. However, be forewarned these rolls are very sweet. A small piece goes a long way. I think this recipe will feed you, your family, your neighborhood and quite possibly a small nation. And you still might have leftovers.
As I reflect on today's adventure, I think, not bad. I've redefined my limitations.

In a small bowl combine water, yeast and sugar. Stir until dissolved. Set aside. The yeast will begin to bubble. That's okay, it's supposed to, because it's alive. If it doesn't, you need new yeast.
In large bowl, prepare pudding mix according to package directions. Add butter, eggs and salt and mix well. Then add yeast mixture. Blend.
Gradually add flour stirring well between additions until a manageable dough is achieved. Then knead until smooth. Do not overflour the dough. It should be very soft but not sticky.
Place in a greased bowl. Cover and let rise until doubled, maybe an hour to an hour and a half.
Place risen dough on a light floured surface. (I find that letting the dough rest for five minutes or so makes the dough easier to manage.) Roll to 34 X 21 inches in size.
Take 1 cup soft butter and spread over surface. In bowl, mix 2 cups brown sugar and 4 teaspoons cinnamon. Sprinkle over the top. Roll up very tightly.
Place on lightly greased cookie sheet. Bring the two ends of the roll together to form a circle. With a sharp knife put a notch every 1 1/2 inches. Cut with thread or knife but not all the way to the other side of the roll. You want to leave a "hinge" of dough. Take one of the "hinged" slices and slightly turn it on its side so that the cut side is facing you. Do this with all the slices.
Cover and let rise until double again, perhaps 45-60 minutes. Bake at 350 degrees about 20 minutes or until this starts to turn golden (don’t overbake).
If you opt to make this into rolls, it will make 24 HUGE rolls. I made one massive tea ring, HUGE mistake. Should have divided the dough into two and made two tea rings, grins.
Sliced maraschino cherries and chopped pecans for decorating
Favorite white glaze
Filling:
1 cup butter, softened to room temperature
2 cups brown sugar
4 teaspoons cinnamon
Posted by Katy ~ at Saturday, January 31, 2009