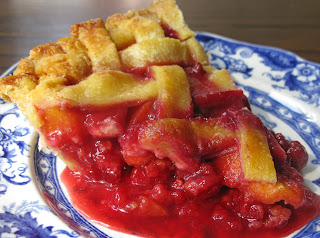 Gosh, I love pie. Good ole apple is probably my favorite, but I pretty much love them all. Pumpkin, pecan, strawberry-rhubarb (now we're talking!), chocolate cream, banana cream, custard, lemon meringue, blueberry....oh I could go on and on.

So, it was no surprise to me that when I spied this recipe on the King Arthur Flour website, I knew I had to try it. The good cooks over there put a lot of effort in developing some of the very best recipes, and this recipe did not disappoint. 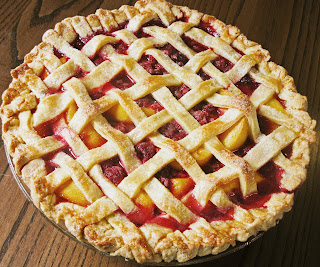 I used frozen peaches and raspberries, and gave my pie a generous six cups of filling; 4 cups of peaches and 2 cups of raspberries. No thin pies for me! I should have thought about the extra juiciness the added fruit would produce. When I cut into the pie, even after sufficiently cooling, it was too juicy. I used 1/3 cup cornstarch called for in the recipe, but next time I'll increase it to maybe just shy of half a cup. I think I'll add a tad more sugar. I love the tartness of raspberries, but a little extra sweetness would've have hurt. Grins.

The vanilla was a surprising touch, though not discernible in the baked pie. In mixing the ingredients, the vanilla, cinnamon and fruit mixture created a wonderful aroma and was enough to make want to me eat the filling Au natural. Heavenly!

As you can tell, I only used the filling part of their recipe because I favor pies over tarts. This pastry recipe has become my favorite. It's a No Fail recipe, and I think it's appropriately named. The only time I've messed it up was when I thought the flour didn't need all the water, and I reduced it. Big mistake. Follow the simple directions, and you will be rewarded with a pie crust that is wonderful to handle. It's velvety smooth and bakes up flaky. I'm not saying that this is the best pastry recipe ever (I think an old fashioned lard is probably flakier and more tender), but for sheer ease, I think you'll have to go some to beat this recipe. 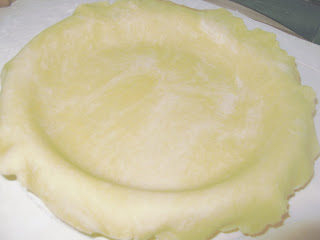 Recipe is from Marcia Adams' New Recipes from Quilt Country, though I have seen it any number of places on the web. My picture is a little pale; the dough will actually be more yellow than shown because of the butter-flavored shortening.

In a large bowl, combine the flour, sugar, salt and shortening. Blend until you have reached the texture of coarse crumbs.

In a separate small bowl, combine the egg, vinegar and water. Beat to combine.

Drizzle the liquids over the flour mixture and mix thoroughly.

Shape the dough into a patty, wrap in plastic wrap, and place in the freezer for 45 minutes, or refrigerate overnight.

When chilled, divide the dough into fourths. Each fourth is one single crust; use two for a two-crust pie. Roll and use immediately or wrap each portion separately and refrigerate or freeze.

The dough will keep nice for a couple of days in the fridge; I have frozen it, defrosted, and used it, but it's not as good tasting, in my opinion.
Posted by Katy ~ at Wednesday, April 29, 2009