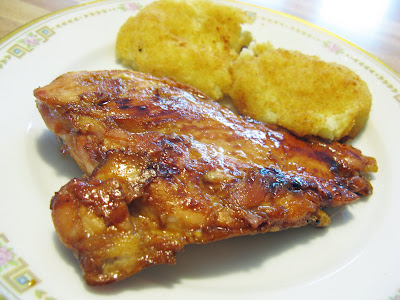 it's "sticking" My brother asked me the other day if I had any idea of how our mother made chicken teriyaki, one of our favorite meals when we were growing up. I have a general idea of how she did it based on what I remember she usually had in the pantry: soy sauce, molasses, brown sugar, ground ginger. What I don't know is the proportions. I've fiddled with the ingredients over the years and haven't come up with anything that tastes anywhere near as good as I remember her making. I've tried asking her, and as Grant can attest, she mysteriously, as if suddenly afflicted, doesn't speak English and will muffle and mumble her words and finally shrug and wave me away. She has so few vanities and knowing that she makes the best chicken teriyaki or Japanese pickles or curried rice is one that she savors (no pun intended), grins. So, we are left on our own to find a suitable replacement.

Hence, this recipe. I was out at my favorite antiques barn and spied a little promotional cookbook for Karo corn syrup, printed in 1981. It's rather dingy but in scanning the recipes, many of them seemed appealing and timeless, and when I saw this little recipe, I knew that I must try this.

It's not as good as Mom's (my mother's chicken teriyaki had a much deeper brown color and flavor), but it's quite satisfactory and will be my go-to recipe.

Preheat oven to 350F. Remove chicken from marinade and place on foil-lined baking sheet and bake until done, probably 45-60 minutes, basting with marinade several times during cooking. Turn chicken part way through to ensure even cooking on both sides.

This would be very nice cut into nice cubes and threaded on a skewer and broiled or grilled.

Marinade is also very good for a pound or so of flank steak.

Cooks Note: Because I elected to cook my chicken breast whole, I slightly flattened it to make it the roughly the same thickness to ensure that the chicken cooked evenly.

I think the next time I use this sauce, I am going to heat it in a sauce pan until it slightly thickens. What I found is that the sauce that was caramelized to the foil actually had a lot of flavor, and when brushed onto the chicken, really added to the visual appeal because of it's deeper, richer color as well as "sticking" quality.