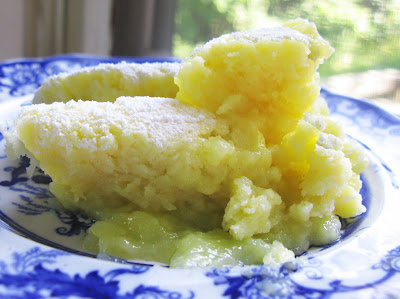 I was talking to my youngest brother, Grant, on the phone the other night and he surprised the dickens out of me by saying he follows my blog. Just when I think he is the most exhausting and exasperating tease on the planet, he switches it all around and leaves me dumbfounded with his interest and awareness of FFAHS.

He told me that the recipes that caught his eye were the couple I had posted that our beloved grandmother made for us when we were kids. That started a whole stream of food memories and we spent a good long time reminiscing. One that we both fondly remember and one of the very first desserts I ever learned how to make was one that she taught me, called cottage pudding, a simple, single layer (dry!) vanilla cake with a lemon hard sauce poured over (to give it some moisture and flavor, I'm sure). I made her recipe a short while back; loved the lemon sauce but the cake was definitely Sahara Desert material LOL.

So, for Grant and for my grandmother, I wanted a lemony cake that had the quality of being cake and at the same time having a sauce. I found this on Allrecipes.com. This is a self-saucing pudding cake that bursts with lemon flavor and then sweetness, both flavors separately and deliciously identifiable upon the tongue. It was a good find and one that I would make again. 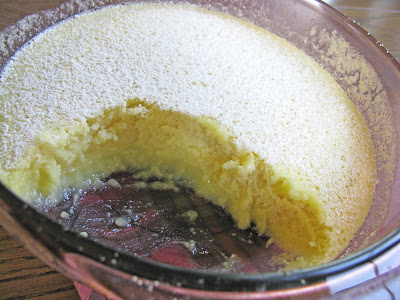 Grant, dear, you surprise me and you make me smile. Out of any of us, you are the keeper and the archivist of the family memories. For you, I shall, (one of these days), post Grammy's cottage pudding because you want your children's grandchildren to know what their great- (however many times removed) great grandmother made and to have a connection with their past. What better way than to share food?

Preheat oven to 350F. Have read an 8 x 8 baking pan or casserole and a separate baking dish large enough to hold it because you're going to use a water bath. Have ready hot water for the water bath.

In a medium bowl, combine and beat together egg yolks, lemon juice, lemon rind, and butter or margarine until thick and lemon colored.

Onto a piece of waxed paper or another bowl, combine sugar, flour, and salt. Add dry ingredients alternately with milk to the yolk mixture, beating well after each addition.

Making sure that there is no trace of fat in the egg whites, beat egg whites until stiff peaks are formed when you raise the beater. Blend egg whites into batter on low speed of electric mixer. Pour baking dish.

My notes: I used a lemon zester to peel the lemon and used the entire peel of one lemon, so I probably had a little more than a teaspoon of lemon, which is fine with me. I love lemon. I added it to my sugar and whizzed it about in my Magic Bullet to make a lemon flavored caster sugar. Caster sugar is a little finer than regular table sugar but not as fine as confectioners' sugar; it gives a little better texture to baked goods. It's an extra step, totally not necessary.
Posted by Katy ~ at Friday, August 14, 2009