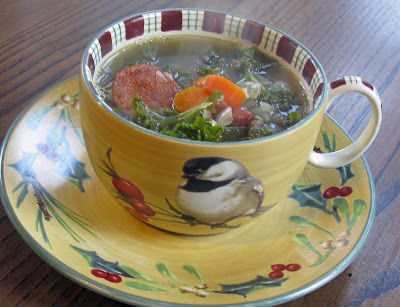 The first time I had Portuguese kale soup was about 35 years ago, when my husband and I spent our honeymoon on Cape Cod (Massachusetts). It was the soup du jour of the many restaurants we visited, and once I discovered this hearty and satisfying soup, I ate it du jour; I just couldn't seem to get enough of its spicy broth, brimming with beans, vegetables and garlicky linguica.

I wasn't going to post this soup, even though it's a personal favorite. I have a recipe from one of my local Cape Cod cookbooks that says their recipe is "authentic" and that is the measuring stick I gauged my soup against. But then like homemade chicken soup, is there one definitive recipe. No, they all are; the same, but different. So, I will not call my recipe an authentic Portuguese kale soup, but certainly in spirit, it's a close cousin.

Pretty much I like a hard and fast recipe to follow, and have great angst over swapping ingredients, but soups invite personal interpretation. I have made this recipe so many times, I do not measure the amounts anymore, and that's the way it is with most homemade soups like this, don't you agree? I'll give you my best guesstimates, the rest is personal preference.

8 ounces dried white beans ** (rinsed, drained, soaked overnight)
8 cups chicken broth, more or less depending on how brothy you like your soup
3 carrots peeled and cut into discs
2 large onions, chopped
1 bunch of kale, washed under running water, then roughly chopped, removing the hard stems
1 pound linguica sausage, cut into discs
1 tablespoon vinegar
(Diced potatoes, celery, which I do not include)

Essentially, it's throw all the ingredients in a large stock pot and cook, covered, over medium heat until the beans are done, 45 minutes to an hour. Test a bean for doneness. Add the kale and once the kale is done, soup's on. The kale may have to be added in batches, depending on how large your stock pot is, but it will cook down (the way spinach does). You'll want the kale soft, but not mush.

Thinking of spinach, if you don't like kale, spinach is good. I think you could also use endive.

If you don't have linguica sausage, kielbasa would make a nice substitute.

**If you don't want to bother with soaking the beans overnight, there's no rule that says you can't buy the white beans in a can, rinse and drain, and save all that soaking time, which will also reduce your cooking time. Historically, I break with tradition and buy the dried beans that are labeled a 17-variety mix, following the soaking directions on the back of the package.
Posted by Katy ~ at Sunday, November 22, 2009