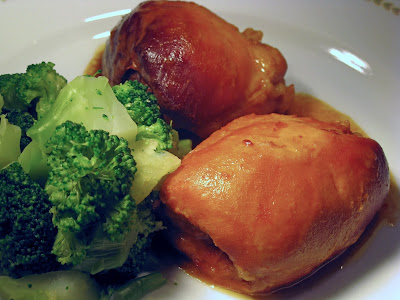 I like citrus and chicken together; they have a natural affinity for each other, each providing a venue to compliment the other.

Ole Sweetie-Pi and I are battling the doggone cold that seems to be going around and the last thing I wanted to do was stand around and fuss with cooking. So out comes my slow cooker to rescue me.

I saw this recipe on the Kraft's Food website and decided to try it. I'll reprint the recipe as they have it and put my minor changes in parenthesis. We liked this; it has a pretty assertive orange flavor because of the marmalade, and it's a bit spicy from the generous use of ginger and the pinch of red pepper flakes.

Pour sauce mixture evenly over chicken in slow cooker. (Do not stir.) Cover with lid.

Cook on LOW for 3 to 5 hours. Serve chicken topped with the sauce.

Though it's not obvious in the photograph, my chicken was falling apart at the end of five hours, so I think even on low my slow cooker may run a little hot. (Once I saw how falling apart the chicken was, I used a scoop to serve up a couple of whole thighs for you.) I probably should have checked this at four hours, but I read that every time you open the lid on the slow cooker you need to add 30 minutes to the cook time. I have no idea if that's true or not, but I'm willing to pass along yet another urban legend, grins.

This makes a lot of sauce which goes great on broccoli and would be equally good on plain rice.