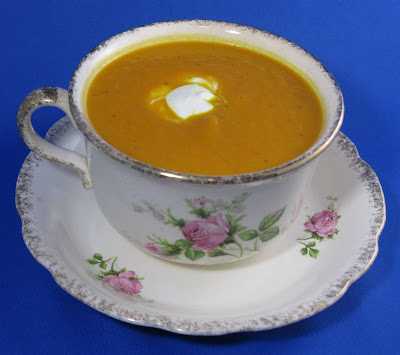 I'm an unabashed sweets lover but I've had enough sugary things for a while. Now all things savory and healthier are calling me and I'm wanting to serve those foods that have more nutrition.

When I told Ole Sweetie-Pi we were having ginger carrot soup he nearly had apoplexy.  That piece of information prompted him to lift the lid of the soup pot, stir the ingredients around into a whirling vortex, taste a sample, grimace in pain, and then go hide in the living room. Honestly, he can be so dramatic.  It didn't stop him from eating a whole bowl of it though when I served it to him, grins.

This ginger carrot soup is subtly warm from the fresh ginger and pepper, with a pleasing sweetness from the fresh carrots and orange juice. The onions, I think, help to balance out the spice and the sweet.  This pureed into a nice thick soup, though to be honest, I only used one box of  vegetable stock, which was less than the five cups called for.  I wasn't about to open up a second box just a cup of stock. I could have made up the difference with water, I suppose, but I found the thickness of the soup to be pleasing and just went with it.

I would and will definitely make this again. I'm pretty sure after eating all those carrots I'll be able to read in the dark without a flashlight.  Ole Sweetie-Pi said he could pass on eating this again, but I don't know.  I think he's still recovering from the shock.

Add the carrots, vegetable stock, and orange juice and bring to a boil.  Cover the pot and reduce the heat to low, allowing the soup to simmer for about 45 minutes, or until the carrots are tender.

Puree the soup using an immersion blender or allow the soup to cool slightly and puree in batches in a blender.

Return the soup to the pot and add the seasonings:   the pinch of nutmeg and salt and pepper to taste.  To serve, add a small dollop of sour cream on top.

For more information about making this soup ahead or serving it cold, click on the link I provided under the recipe name.
Posted by Katy ~ at Sunday, December 27, 2009