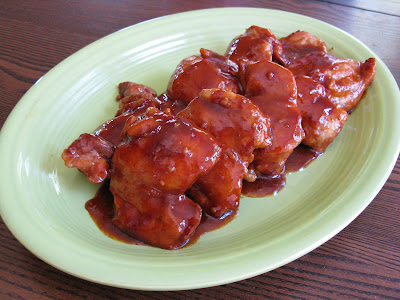 This chicken falls into the finger-lickin'-good category! I made this on Mother's Day using chicken wings (which is what the original recipe called for), and there were happy sounds all around the table. No leftovers! We liked this so much we couldn't wait to make it again;  Ole Sweetie-Pi does not care for meat on the bone so this time I used boneless, skinless chicken thighs and it was so good!

I think if one cooked down the marinade til it was nice and syrupy, it would be super good to brush on chicken on the grill of if you wanted to cook the chicken in the oven.  Cooked as directed, there is some remaining sauce which I poured over the chicken after plating it, but the sauce would be good on rice or perhaps some grilled vegetables.  The caramelized sauce can leave a bit of a mess in your pan, but as it's sugar based, a little soaking in hot water will make the job a whole lot easier and virtually becomes no effort at all.

**The original recipe says that wings will cook in 16 minutes, (and other reviewers said the same thing) but I found  the time to be grossly understated.  I think I must have cooked the wings a good 30 minutes or more, first because I wanted the marinade to reduce to a syrup and turn to a desirable caramel color and consistency and secondly and more importantly, the chicken did not test done when I pierced it with a tined fork.  The thighs took about the same amount of time, so I would recommend using your best judgment in timing the cooking of this.  Of course, this could be due in whole to my method of cooking, smiles, as I did not cover the chicken while it cooked.  I brought the sauce to a bubble, saw that the chicken was going to simmer in the marinade, and became trepidacious of boiling/steaming the chicken.

1/4 cup packed brown sugar (I used dark brown, but light brown would also be good)
3/4 teaspoon minced garlic
3/4 teaspoon grated ginger
1/4 cup bourbon (I used Jim Beam, but only because that's what we have)
2 tablespoons ketchup

Give a couple of good swirls of oil in a skillet large enough to hold the chicken in a single layer.  (I place the chicken so that all the top/outer sides are facing me, so when it comes time to turn them I be able to tell that they have all been turned  over.)

In a separate, smallish bowl combine the remaining ingredients and then pour over the chicken.

**Cover and cook over medium heat, about 20 minutes, or until chicken is done, turning frequently to prevent chicken from sticking.
Posted by Katy ~ at Saturday, May 14, 2011