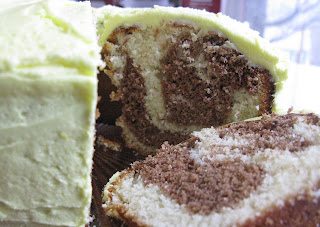 I was out thrifting with Sweetie-Pi and I spied a charming little pamphlet called "10 Cakes Husbands Like Best from Spry's Recipe Round-Up!" How could I resist that? I couldn't! There's no copyright or publishing information in the booklet, but the pictures are all in black and white and "Aunt Jenny," looks like Donna Reed or the original Betty Crocker, so I suspect it was published 40's to the 50's sometime.

I haven't had a marble cake since I don't know when, and it's been even longer than that since I've baked one. I don't know why; it's one of my favorite cakes, but typically we just go for the single flavor cake. With this booklet in hand as inspiration, I decided to make Marble Cake Supreme first. 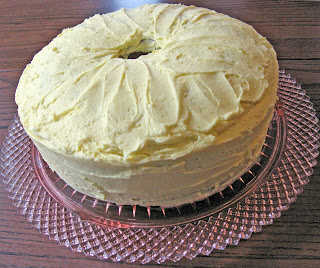 I'm going to give you the directions as they were written, and then I'll follow with my thoughts.

Read through the directions first, as the ingredients are added and mixed at different times, with the eggs being added in two separate additions.

Beat
200 strokes (2 minutes by hand or on a mixer at low speed). Scrape bowl and spoon or beater

Put 1/3 of batter in a smaller mixing bowl.

My thoughts: This cake was dry and crumbly. I think it's because the recipe says to cook at 375F and most of our recipes today say 350F. Secondly, the cooking time is way off. Recipe says 60-70 minutes. My cake was overdone at 45 minutes (which could account for some of the dryness, I suspect).

The spices in the chocolate were unusual; not entirely disagreeable, just a surprise. Also, I didn't try to figure out 3/4 of a tablespoon. My math skills are abysmal; I used a level tablespoon. No, I do not think that little extra bit of cocoa is what made the cake dry.

The lemon frosting is very good; it had a bright lemon flavor, and I really liked it. I'm not entirely convinced it should go on a marble cake.

Sweetie-Pi and I both had a small portion of this today, and rated it a "Hmmmmmm." I'm going ahead and making the nine remaining cakes in the "10 Cakes Husbands Like Best" booklet. I'm definitely reducing the heat next time (all the recipes call for 375F) and will adjust the cooking times based on what we know today.

And, if the other cakes turn out well, I may round back and try this one again. I think it has potential.

It does make me wonder whose husband liked this cake best, though.
Posted by Katy ~ at Monday, March 30, 2009