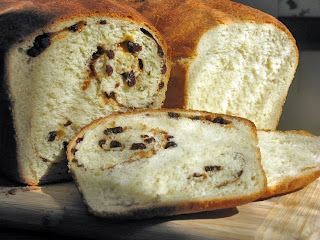 I have to laugh at myself. We were low on bread, I had the time and the inclination so I turned to my old friend, Betty Crocker, and found this time honored recipe. So what's so funny about that? Because the serving size says 2 loaves in two 9 x 5 pans or 3 loaves in three 8 x 4 pans. I thought three loaves of bread would be too much so I made two! It's the same amount of dough!

Sweetie-Pi won't eat raisin bread, so I was delighted to find a recipe that gave me the option to make a loaf of both. 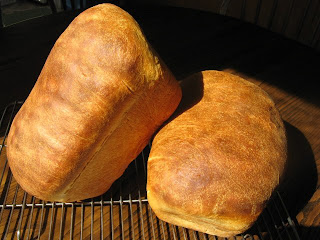 As you can see, this recipe made big, beautiful loaves, sweet, but not like my Amish White Bread. I would still like to try a bread with even less sweetness. These loaves are hearty and delicious. The slices are so wide that they extended out past the toaster slots. Now that's big! When I spread the raisins (actually I used currants) on, I thought I had poured on a ton, but when I see the bread slices, it doesn't look nearly enough. So next time, more currants! I did not use the full amount of the additional sugar/cinnamon mixture, maybe several teaspoons less, and it was sweet, cinnamony enough for me.

In a large mixing bowl (not stainless steel) dissolve and proof the yeast in the 3/4 cup of warm water. Once it's all nice and foamy (maybe in about 10 minutes), stir in the 2 2/3 cups warm water, sugar, salt, shortening and 5 cups of the flour. Beat until smooth. Then add enough remaining flour to make the dough easy to handle. (I usually gauge it by the fact that it doesn't stick to my hands but is still very soft. You'll get the feel of it, don't worry.)

Lightly spread a little flour on a flat surface and turn the dough out onto it. Knead until smooth and elastic, adding small amounts of flour as needed to keep it from sticking to your work surface (about ten minutes). Place dough in a greased bowl, turning the dough so that the greased side is up (this will create less resistance so that the dough can rise easier). Cover and let rise in a warm place until double, about one hour.

After it is risen, punch the dough down and divide in half. Roll each half into a rectangle, 18 x 9 inches. Roll up, beginning at short side. With the sides of your hand, press each end to seal. Fold ends under loaf. Place seam side down in greased loaf pans. Let rise again until double, about one hour.

Heat oven to 425F. Place the loaves on a low rack so that the tops of the pans are in the center of the oven. Bake 30 to 35 minutes or until deep golden brown and loaves sound hollow when tapped. Remove from pans. Brush loaves with soft butter. Cool on rack.

Stir 1 cup of raisins with a little flour. After rolling dough into rectangles, sprinkle each with one tablespoon water and mixture of 1/4 cup sugar and 2 teaspoons cinnamon. (I combined the sugar and cinnamon together in a custard cup, whisked to blend well and spread with a teaspoon.) Now as I said, I thought I had poured on plenty of currants, but when I sliced it, they didn't look abundant enough. I would add more; I would also make sure that I added them all the way to the edges. If some fall out as I roll up the bread, well my treat!

The raisin bread made some mighty fine toast and smelled so good as it was toasting. The white bread is a great versatile bread, good for sandwiches, french toast, plain with butter!
Posted by Katy ~ at Thursday, March 12, 2009