No Name Chicken (or Pork) Dish 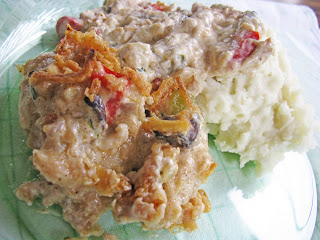 Hmmm...believe it or not I do have some limits on the amount of fat, cholesterol, or starch I can consume in one sitting. It's true. However....

During my child bearing years (I hope that is a delicate way to express this) there were times when my closest friend and I would need something just creaking with carbs and fat. (My arteries are sclerosing as I write this, but I do this for you!)

My friend received a copy of this recipe from her sister without a title, so we don't know the actual name. We've always just called it "Chicken Dish" or "Pork Dish" ( if we were using boneless pork chops). The phone would ring; I'd answer, and she would say just two words, "Chicken dish!" and I would say, "I'll be right there!" Sometimes I'd stop to pick up a cheap (sorry, I mean inexpensive) bottle of white wine. She would prepare this; I would watch. And then the two of us would eat unladylike mountains of sauce covered chicken and mashed potatoes, toast the day, and groan in bloated satisfaction.

She makes it far better than I ever could; I have no idea what her secret is, and I've stood over her and watched her make this numerous times so I know the recipe hasn't been altered (as some cooks do when they don't want to share their signature dinner). I'm going to give you the recipe as she gave it to me. I think part of it is that her dashes of this and that are far more generous than what I perceive a dash to be. The recipe calls for small amounts of butter, but I distinctly recall her using maybe half a stick at a time. It's one of those recipes where you kind of have to taste as you go along. One of the joys of cooking, I think.

Just let me leave you with this caveat; I think there is not a lot of real food value in this dish. It is extremely high in fat, sodium, and all else that is not good for you. But if you are in dire need of carbs to get you through the day (or the week), this will more than suffice. And as I used to say to my friend, "I'm going to push my car home just to burn off some of these calories."

No Name Chicken (or Pork) Dish

Mix 1 cup of flour, 1 teaspoon seasoning salt, and black pepper in a plate or dish. Dip the chicken (6-8, however many you are feeding or how hungry you are) in the flour mixture. Set aside.

Heat a skillet with vegetable oil (I think she used a half a stick of butter here with a little oil). Fry chicken until browned on both sides. Remove chicken to dish, set aside.

Slice and cut into bite-sized pieces one onion, one red pepper, one green pepper. Put in the saute pan with two tablespoons of butter (again I think she probably used half a stick here), 2 tablespoons of wine. Saute until tender. Remove from heat.

In a separate bowl, combine 1 can of cream of mushroom, one-half of a 16-ounce container of sour cream, 1 can of milk, 1 teaspoon wine, half a can of French fried onions, chopped mushrooms (I just used a pint container), 1/2 teaspoon sweet basil, dash of celery salt, dash of season salt. Mix together with a whisk.

Combine the sauteed vegetables with the sauce mixture.

Place the chicken in a 9"x13" baking dish. Pour the sauce over the top. Crumble the remaining canned French fried onions over the sauce. Bake at 350 F for approximately 30 minutes or until chicken is cooked through.

When done remove the chicken and put on a platter. Add the remaining half of sour cream to the sauce mixture' serve separately.

Scoop generous amounts of sauce over the chicken and heaps of creamy mashed potatoes made with real butter and cream. Swear you will never eat this much food again.