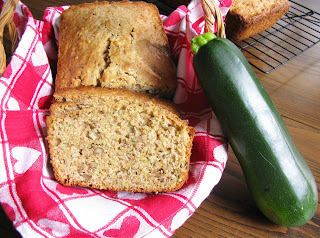 Many of my fellow bloggers are posting about healthy food choices and healthier cooking. I won't say I've succumbed to peer pressure, but let's say this is a nod to a healthier quick bread recipe.

My grandmother was really big on healthy cooking. She used to subscribe to magazines about organic gardening and bought any number of cookbooks for heart healthy recipes, saving your eyesight, healthy brain, and just about every other organ, I think.

One of the things I remember about her is that she always had wheat germ in her refrigerator. What I don't remember is how she used it. I bought it, then discovered I didn't know what to do with it except sprinkle it on yogurt (and I'm almost positive my grandmother never ate yogurt in her entire life; it would've been considered "foreigner" food and that would have been the end of that).

Anyway, so I've had this jar of wheat germ in my fridge for longer than I want to admit. I was reading my Best Recipes from the Backs of Boxes, Bottles, Cans and Jars cookbook when this recipe leaped out at me. Ah ha!

This bread is interesting. Nice mild flavor (unlike my other zucchini bread recipe which has an assertive cinnamon flavor). This bread also has texture, kind of crumbly, but not so much that you can't spread softened butter on it. I like it. I feel righteous. I like that, too! I'm pretty sure that I can now run faster and jump higher than I could before. I'm not sure why I want to do that.

In a large bowl, beat the eggs until light colored and fluffy. Add the sugar, vanilla and oil; beat well.

Stir in the zucchini.

Gradually stir in the dry ingredients to the wet ingredients, until just combined. Divide the batter between the two pans. Place in preheated oven.

Bake for about 1 hour or until a pick inserted in the center comes out clean. Cool for 5 to 10 minutes before turning out onto a rack to finish cooling.
Posted by Katy ~ at Saturday, May 02, 2009