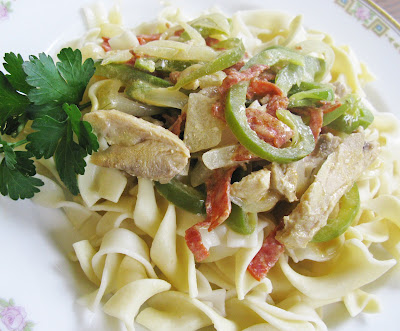 As there are only the two of us, cooking usually means leftovers for an additional two or three meals. I like leftovers and sometimes will eat the previous night's dinner for the next morning's breakfast, but after the second meal I am searching for ideas for a "new" and tasty meal. That's what happened after I made the Chicken Marsala: we had an abundance of noodles and chicken.

I went back to my Chicken Recipes Step by Step cookbook and found this. Sweetie-Pi and I have had this once before and we enjoyed it, and it certainly worked very well in giving new life to our leftovers.

The measurements are in metric, but because this is cooking and not baking, I didn't bother to recalculate the math. I just eyeballed what I thought would be enough pasta and pepperoni, but followed the sauce recipe exactly, because of the balance of flavors.

Cut chicken into strips, set aside.

Heat water for pasta and cook according to package directions.

In a large fry pan, heat the oil and add the pepperoni, onion and green pepper. Cook over medium heat for 2 minutes or until the vegetables are crisp tender.

Stir in the all remaining ingredients, except chicken, and simmer gently for two minutes.

Add chicken and heat through, stirring the mixture occasionally. Season to taste with salt and pepper.

Place the pasta in a large serving bowl and pour the chicken and sauce over. Stir to combine.

When I made this, I had two boneless, skinless chicken thighs remaining, which I cut up. I sliced up about a dozen of those pepperonis used for pizza topping. I had leftover pasta from the night before so I did what a lot of restaurants do: I just boiled a pot of water, turned off the heat, threw my pasta in for a couple of minutes to heat it through and drained.

This dish doesn't have what I'd describe as a big flavor (probably partly because I didn't use barbecued chicken). The strongest flavor was the pepperoni, which gave it a nice spicy flavor that wasn't bold. For a family that fluffs their meal out with a salad and bread, the sauce would probably cover enough pasta to serve four people, but the pasta will not be swimming in sauce.

This is not the best meal I have ever eaten, however, it is far from the worst. I will turn to this recipe again and again because of its simplicity, good flavor, and quick preparation.
Posted by Katy ~ at Wednesday, May 20, 2009