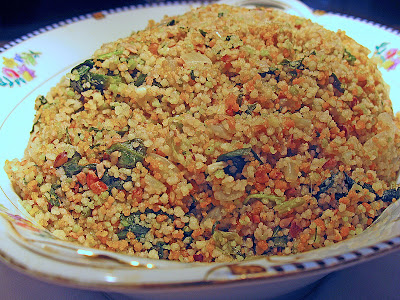 I was out grocery shopping the other day and picked up a big jar of tri-colored couscous. This is a fairly new discovery for me, but one which I've enjoyed, especially in this recipe. It makes a quick, different, and delicious side dish, faster than potatoes or pasta, and equally as versatile. I think the first time I had even heard of couscous was on the old the Galloping Gourmet show (remember Graham Kerr?) and long since then associated couscous with being gourmet, ergo out of my skill set. I forget now which TV chef showed me I could make it, but once I saw how easy it is, couscous has been in my pantry every since.

As my groceries were being rung up, the cashier looked at the bright specks of yellow, white and orange, turned the jar to face me, and said, "What is this?" "Couscous," I said absently, trying to organize my groceries on the conveyor belt. (I like my dairies to be together, the meats together, canned items, together, etc. No mixing and matching, please.) "Yes, but what is it?" she asked again. "I'd was wondering the same thing," the lady in line behind me said.

I started to give an encyclopedic description by saying it's pasta, often associated with Africa, made with semolina flour, and changed my mind. "You know how pasta comes in different shapes, right?" Nods and noises of affirmation followed. "Well, couscous is like little pasta seed pearls. At it's simplest, add hot chicken broth, wait five minutes, and you have pasta."

And yes, it is really pretty much that simple. This side dish is subtle in flavor (as pasta sans tomato sauce tends to be) and relies on the added ingredients to give it texture, flavor and color. No surprise, Ole Sweetie-Pi won't go near this (won't even try it) as he has that infuriating looks like rice-lice thing going on, even though he knows he loves pasta, spinach and onions. **Sigh**

I found this recipe on Recipezaar.

Now at this same grocery store, on a different day, as I was checking out, the bagger was a young woman. She was wrestling with a medium sized bottle, trying to decide which bag to put it in. She read the label, looked at me, and said "What is vanilla extract?"

My dear fellow bloggers, if ever you think what you do doesn't matter, that this is just a hobby, a place to store recipes, I beg to differ.