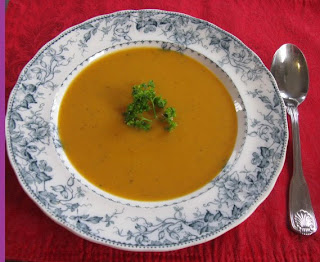 Spring has flirted with us for a day or two, seducing us with promises of more as we stood outside on the back deck, basking in the first warm rays. And just as suddenly, the wind picked up, the skies were heavy with snow, and my thoughts turned to something warm and satisfying.

We're pretty simple folk here; not a whole lot of gourmet cooking in my kitchen. There are certain foodstuffs that I keep; for vegetables, typically carrots, potatoes, onions, scallions, celery. I brought out several cookbooks, and settled into my Everybody Eats Well in Belgium cookbook by Ruth Van Waerebeek with Maria Robbins. And there I saw it. I was hesitant to try it, as the soups we eat tend to be chunky with vegetables with maybe some pasta thrown in for good measure and this soup was pureed, of all things. Would Sweetie-Pi even try this? he can be so particular.

I shouldn't have worried; after the first mouthful Sweetie-Pi matched me spoonful for spoonful. This soup is sophisticated. It is sublime, velvety, earthy, rich. It's orange, classy in a beautiful bowl. It should be served to only your most discerning friends and family.

Melt the butter in a heavy soup pot over medium heat. Add the leeks and onions, cook, stirring until wilted, but not browned, about ten minutes

Add the chicken broth, water, carrots, potato, thyme and bay leaf. Cover, simmer until the vegetables are very soft, about 35 minutes. Remove from heat and let cool a little. Discard the bay leaf.

Puree the soup in small batches in a blender or food processor (or use a food emersion blender). Return the soup to the pot and stir in the milk, adding a little more if the soup is too thick for your liking. Season with salt and pepper to taste.

Reheat gently and serve sprinkled with minced parsley. Serve the croutons in a bowl at the table.

** The recipe called for leeks, but in the variations section, it was suggested to use a bunch of scallions for the leeks. Scallions I had.

** Also the recipe calls for four cups of water. It is my strong personal opinion that water does not flavor anything. So I increased the chicken broth (I only had canned) to 4 cups and reduced the water to 2 cups.

As an aside, we love Agatha Christie's Belgium detective, Hercule Poirot. You just know that we had to talk in his clipped accent all the while we savored this soup. **sigh** So much for classy and sophisticated.
Posted by Katy ~ at Monday, March 09, 2009