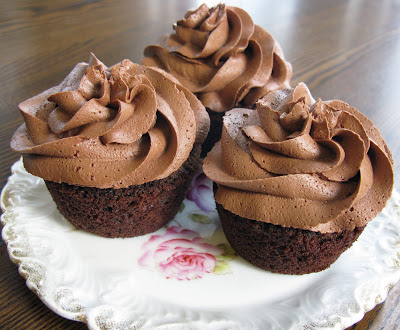 My bloggy friend, Kim, from The Ungourmet, is a cupcake and muffin maven.  Honestly, she's got it all  and is such an inspiration to me. Every time I see one of her posts, I think, "I have must do this!"  And then I chicken out.  I have a shameful past.

I can't tell you the last time I made cupcakes.  I love the idea, that single serving cakelet all to myself, with all the frosting and goodness of a slice of cake.  Except cupcakes are tactile ~ I can eat it with my hands, grins.  That is, unless you've had one of my earlier cupcakes.  Dry, dry, dry and disappointing overall; I understood why people wanted a glass of milk.  With my cupcakes, you needed  several glasses of milk.  That's the honest truth. So I gave up on cupcakes.  And then I tried this recipe from Food Network TV.  My mind is changed.  My cooking horizons have been opened.  I can make cupcakes that are actually, well, in a word, wonderful!

By all rights these were going to be ganache covered, creamed filled, chocolate cupcakes. I wanted the cake recipe but was going to swap out the cream filling from another; I didn't want to use all that corn syrup.   Someone (who shall remain nameless) left two swirls of the marshmallow fluff  I needed as an ingredient for the filling, leading me to believe I had a full jar.  Since I was making these for Mr. Nameless because he's the chocolate lover, and because he was the one who was giving me the big pleading blue eyes, and because the cupcakes were already made, I decided to just frost them and save the cream filled ones for another day. 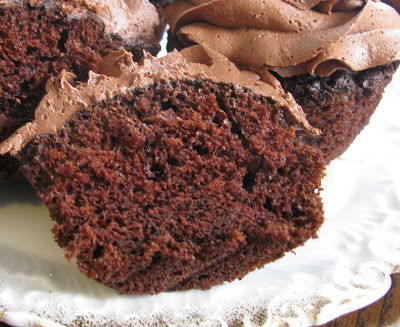 Generously grease a 12-cup muffin-cupcake tin and set aside (or use paper liners). I found that I made 12 standard sized cupcakes and had enough  remaining batter  to make 3 super-sized cupcakes.  Preheat over to 350*F.

In a large mixing bowl, beat the butter and sugar together at high speed for 15 seconds.

With the mixer on its lowest setting, beat in a third of the flour mixture.

Beat in the buttermilk and vanilla, then another third of the flour.

Beat in the coffee and then the remaining flour.

Fill the cups of the muffin tin two-thirds full and bake for 15 minutes, or until the centers spring back when lightly pressed and a cake tester comes out clean. Set the pan on a rack to cool.

Remove cupcakes from tin before frosting, and frost as desired.

***I was working with two recipes simultaneously, and they were quite similar in ingredients, forgot where I was supposed to be looking and inadvertently added 1/2 teaspoon baking powder instead of 1/4 teaspoon called for in the original recipe.  No way to take it out so I forged ahead.  Fortunately, it worked just fine.


Hershey's Perfectly Chocolate Chocolate Frost
This time I swapped heavy cream for the milk in the original recipe.  Add additional cream as necessary to make a desirable spreading consistency and don't be afraid to beat this well.  It makes for a luscious, creamy frosting and is a dream to pipe.
Posted by Katy ~ at Sunday, February 07, 2010