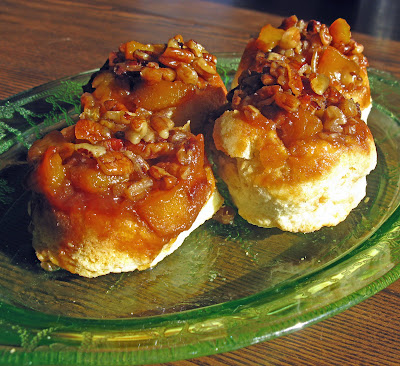 Ingrid, my beautiful friend of  3B's...Baseball, Baking & Books,  recently posted an irresistible breakfast treat she makes for her adorable family.  She says she found this recipe on Monica's blog, Lick the Bowl Clean.  Wow!  Have you ever visited either blog?  Both have beautiful photography and delicious food.  Just a word of caution, don't to to either blog if you're even the teeniest bit  hungry because you'll be ravenous when you leave.  I know this from personal experience; proceed at your own risk.  You have been warned, grins.
The minute I saw these caramel-y , nutty, fruit topped breakfast treats I had to make them the very next morning.  And if that's not enough to convince you, even the bottoms of the biscuits are brushed in melted butter and sprinkled with cinnamon sugar.  Oh my!  I think I even dreamed about them.  And the good news?  You can use any kind or fruit or that catches your imagination and pleases your palate.  There is no right or wrong combination.
I had bananas and thought I'd make the same as Ingrid's, but I've had a real yen for peaches lately, so peach it was.  I just pulled out a bag of frozen  sliced peaches, picked of any ice chips, roughly chopped perhaps three-fourths of the bag.  I didn't have canned refrigerator biscuits (what a time saver that would be, and equally as good), so whipped up my favorite biscuit recipe, Never Fail Biscuits . 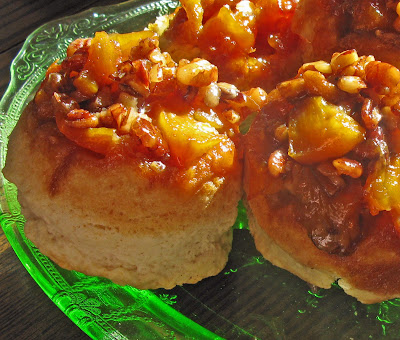 Ingrid, these were so good.  I won't embarrass myself and tell you how many  golden caramel, peach, and nut crowed, cinnamon and sugar dusted, buttery bottomed  biscuits I enjoyed with my coffee.  And Ole Sweetie-Pi.  Well, let's just say he thoroughly enjoyed his (though I omitted the nuts for his as he has a nut sensitivity.)
Let me give you Monica's recipe, pretty much as she wrote it, with my notes at the following.


Preheat oven to 350 degrees F. Spray  with a nonstick cooking spray or generously grease your muffin tins, set aside until you are ready to begin layering your ingredients.

Chop the nuts, set aside; dice the butter, set aside; slice (or dice) the fruit you are using, set aside. Open the can of refrigerated biscuits , or have your from-scratch biscuits already rolled and cut out, waiting to be used.

To begin, place 1/2 tablespoon or two of the 8 butter pats into each muffin cup. Sprinkle chopped pecans over the butter, then a couple of tablespoons of diced peaches over the pecans. Sprinkle 1/2 teaspoon brown sugar and a pinch of cinnamon. Top with biscuit and press into muffin tin. Brush each biscuit with melted butter and sprinkle with cinnamon sugar.

Bake for 18 minutes or until golden and puffed. Allow to cool for a couple minutes before gently scooping them out onto a plate.

**  My biscuit recipe makes more than 8 biscuits, closer to a dozen actually because I rolled them thinner than usual; I didn't want them exploding over the tops of the muffin tins.  Because the recipe is so simple, I just eyeballed the amounts for the additional biscuits. It worked out well; recipe is forgiving.

***I did not have brown sugar (what's up with that, and I'm sure I bought some the last time I went shopping!!)  Anyway, to make do, thoroughly combine 1 tablespoon of molasses with 1/2 cup of white sugar. To make dark brown sugar, double the amount of molasses.  Voila!  That's all there is to it.

****My biscuits were a tad salty to me; next time I will use unsalted butter.

Ingrid, thanks again for finding and sharing such a delightful breakfast treat.  This is a recipe I'll turn to time and time again.  Already, I'm imagining the other fruits and nut combinations I can use....