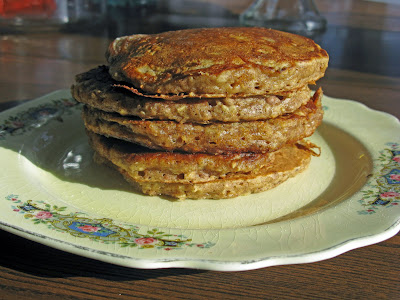 It's been a while since I've seen you at breakfast time so I made these pancakes.  I should probably be embarrassed to admit this, but I'm going to say it anyway.  You know those prepared packages of instant oatmeal cereals that come in the variety pack.  Well, I love those, and the apple one is my favorite.  The moment I saw this recipe I knew I was going to love it; and I do.

Ole Sweetie-Pi didn't care for these as much.   He thought these tasted okay, but too cookie-like in flavor and somehow the word limp was used to describe texture.  Sigh.

These golden oatmeal apple pancakes are hearty in texture.  The oatmeal gives it substance, the apple gives it texture.  There is just the right amount of sweetness  with the brown sugar and generous amount of cinnamon  (I enjoyed these plain) but with maple syrup, divine.

I found them to be a little tricky to cook.  The oatmeal causes kinks in the batter (for lack of a more technical cooking term) so that when they are flipped, they tend to break apart.  I found that making smaller, thinner pancakes and using the widest spatula I had worked much better and by the second batch I was able to have a pancake that wasn't a jumbled (but still delicious) heap of pancake.

In a large bowl, mix together the oats and buttermilk and allow to stand for 10 minutes to soften the oatmeal.

On a piece of waxed paper or in another bowl, sift together the flour, baking soda, cinnamon, and salt.

Whisk together the egg yolks, brown sugar, and melted butter. Add this to the oats and buttermilk.

Stir in the grated apple.

Slowly add in the dry ingredients until just moistened. Stir in the pecans, if using.

Whip the egg whites until soft peaks are formed and then gently fold them into the pancake batter.

Heat up a large fry pan or griddle over medium high heat. Add 2 or 3 tablespoons of vegetable oil to the pan. Using a quarter-cup measuring cup, measure the pancake batter into the hot oil. Cook each side until browned (about 3 minutes).