It's a Party for Dave at My Year On the Grill!! 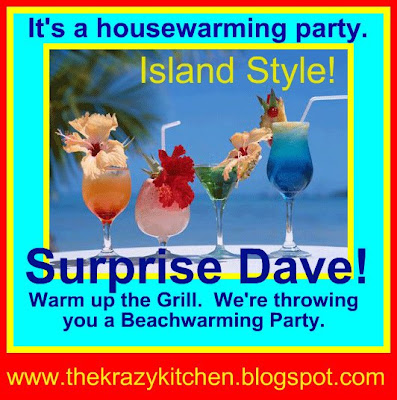 WOO HOO!! It's a party!!  A tropical island party!!  If you haven't heard by now, my blogging friend Dave at My Year on the Grill, and his beautiful (sainted) wife Jackie have moved from snowy, blowy Kansas to the sunny, breezy Virgin Islands!!  It's tough duty, but I know he is up to the challenge. After all, he's only been cooking for a short while, but he's fearless and creative and humorous ~ he is the Grill Master and the Capped and Caped Master Baker.  Just one look at his blog and you'll be drooling and dreaming of grilling and baking. Dave's also started two new blogs that are listed in his sidebar which chronicle his experiences there.  And, if that's not enough, he also participates as a contributor to another delicious blog, Welcome to Our Krazy Kitchen.  Whew!  I'm telling you here and now, the chopped vegetables fly, the flour dust doesn't settle, and the rubs and meats sizzle when he's around!

That's all well and (so very!) good.  That's Kansas-style cooking. Heck, that's even New England cooking! But what happens when you move to the Virgin Islands...well, now...that's a whole 'nother story now isn't it?  A whole new challenge.  Dave has begun posting from his new locale, but...

His blogging friend, Min R at  Our Krazy Kitchen and The Bad Girl's Kitchen, asked Dave's friends to get together, throw him a party, and share some island-type recipes with him.  Naturally, if it's a party, I want to be there!
. 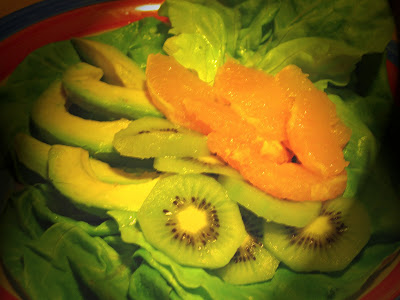 So, when I think island...I think lots and lots of fresh fruits...like eating sunshine.  Of course you can't tell that from this picture (snow storms, Dave,  a week of snow storms and over 300,000 people in my home state without power  going on several days now.  I know you're missing it.)

This simple salad is delicious.  I loved it.  Course do I have to even say that Ole Sweetie-Pi won't go near it.  Nope.  He won't even try.  He knows he doesn't like anything but iceberg lettuce and avocado is simply out of the question.  I think he'd rather be dragged behind a team of wild horses.  But never mind him right now.  I just want to reiterate that this salad is light, delicious and healthy and full of sunshine. And with the snow plows still going by, a bit of the tropics!

Peel the oranges and separate into sections.  Use a sharp knife to remove the membrane and the pith, capturing any juices in a bowl. **

Peel and slice the kiwi fruit.

Arrange the fruits on a bed of lettuce on a salad plate.

For the dressing, measure the reserved orange juice and add enough lime juice to make 1/2 cup.  Add the salt, honey and oil.  Whisk thoroughly until well combined.  Lightly cover the salad with the dressing, serving any remainder on the side.

**Okay, now the truth...  No way were my oranges going to peel as nicely or as beautifully as I hoped, and when it came to the orange juice, well there just wasn't any.  I cut open open and freshly squeezed orange juice into a measuring cup, had about 1/4 cup, and added 1/4 cup of lime juice (the stuff from the green bottle, gasp, because that's what I had on hand and  I forgot to buy fresh limes at the grocery store.  Six thousand of my closest friends and neighbors were there and I just wanted to leave.  Ok, that's an exaggeration, maybe it was only five thousand...) I could drink this dressing through a straw I liked it so much!

Dave, Jackie, I hope you enjoy your stay in the U.S. Virgin Islands.

I wish I were there.