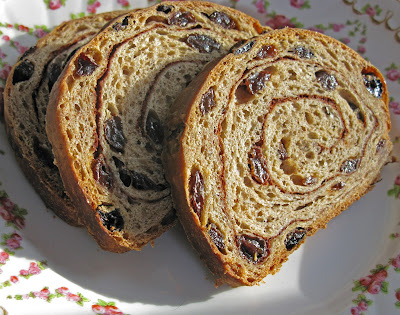 I've had a hankerin' for cinnamon raisin bread for a while now.  It's one of my all-time favorite breakfast treats, and once I get the craving I can't seem to get it out of my mind.  Our local breakfast place doesn't serve it and it's becoming scare as hen's teeth to find it on on our grocer's shelves and when I do find it, the cost is the price of a second mortgage for a good quality loaf.  All I really want is a couple of nice pieces to satisfy my craving.  I know me, if I have a whole loaf, I'll eat it. 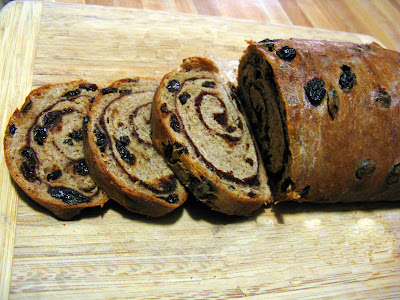 So, I bought a Fine Cooking magazine and lo and behold was a cinnamon-raisin swirl bread recipe.  Is that a divine hint or what?  So, I  dug out my bowls and pastry mat and ingredients and set to make this.

As my grandmother would say, "I'll tell you what..." if you had a loaf of this you'd be hard pressed not to eat an entire loaf in one sitting.   This Fine Cooking recipe is chuck a block full of plumped, juicy raisins  that are added into the dough and a ton of cinnamon, added to the dough and then as part of the filling.  There is absolutely no skimping.

A couple of caveats:  This is a sticky dough, but not as wet as a  batter bread.  Just stay with the directions; more flour is added later on, but only when it's time to roll it out.

This dough has three risings.  I confess to messing up and only doing two.  Now I'm not sure if it's my cool New England kitchen or the recipe itself (minus the middle rising or could it be the instant yeast had gone past date?), but this bread did not rise well at all for me.  My warm place is setting the loaf pans in a plastic tent in the sun on my kitchen table, and that usually works very well.  When I saw the dough was still not rising, I put my oven on warm, left it on for about 30 seconds, and put the pans of dough in the oven for about 2 hours.  Still the dough didn't rise to bread dough filling the pan.  I baked it anyway, and the bread rose a little more while baking, but still not to the height of  the big loaves I made here.  It took me a couple of minutes to figure out that my older recipe called for double the flour, etc., but not nearly the amount of raisins and cinnamon, smiles.  These Fine Cooking loaves are apparently meant to be small.

These loaves are dense.  In reading the reviews at Fine Cooking, I see that another baker made the same observation, so I want to think (smiles) this is to be expected.

In the final analysis, this is truly a very good, almost superb, cinnamon-raisin bread.  My chief complaint of other recipes is that the cinnamon and raisins were skimpy and fell out of the rolled bread. My chief complaint with this one is the heaviness of the smallish loaves, which is richly overcome by the abundance of raisins and cinnamon.  Plumping the raisins and adding them directly to the dough along with a generous portion of cinnamon and sugar is positively genius.

First plump up the raisins.  Put them in a large measuring cup or bowl and add enough hot water to cover them.  Allow to sit for five minutes and then drain them.

If you are fortunate enough to have a stand mixer, this would be a good time to use it, otherwise you can do this by hand, it's just a little work.


For the first rise:  Turn the dough out onto a well-floured surface, roll it into a ball,.  Clean the bowl you were just using, lightly oil it, and put the dough in the oiled bowl. Cover loosely with plastic wrap and let sit at room temperature until the dough looks slightly puffy, about 30 minutes. 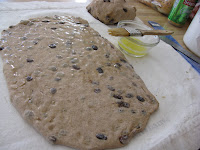 For the second rise:  On a well-floured surface, use your hands to flatten and spread the dough out until it’s about 3/4 inch thick. Fold the dough in half from top to bottom, then in half again from left to right. Return the dough to the bowl, cover, and let sit until it has risen slightly, about 30 minutes more.
For the third rise: Lightly grease two 8" x 4" loaf pans with butter.
Starting from the short side, gently roll each rectangle into an 8-1/2-inch-long cylinder. Put the cylinders in the pans, seam side down. Cover loosely with plastic wrap. Let rest at room temperature about 60-90 minutes.  The dough will spring back when lightly poked. 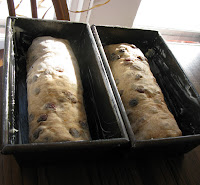 Bake:  Position a rack in the center of the oven and heat the oven to 375°F. Bake the loaves, rotating and swapping the positions of the pans halfway through baking, until dark brown and hollow-sounding when thumped on top and an instant-read thermometer inserted in the center of the loaves registers about 190°F, 30 to 35 minutes. Transfer the loaves in their pans to a rack

Melt the remaining butter and use it to brush the tops of the loaves.  When cool enough to handle, tip the loaves out onto the rack to finish cooling.  Try and wait before slicing into the bread!
Bread stays nice for about five days.  Doubt if you can make it last that long!
Posted by Katy ~ at Tuesday, January 17, 2012