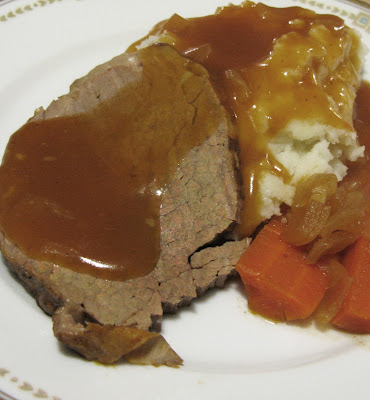 Now here was a meal that was a tasty surprise. I've mentioned it before, but I generally don't make a delicious beef meal, but with a few kitchen staples, this came together easily, and we both liked it. I still think there are few things better than perfect slices of rare, oven roasted beef, but I seem to be particularly challenged in that area.  For now, this suffices very well. Ole Sweetie-Pi loved this. Personally, I'm more into the mashed potatoes and gravy.

Trim the roast of excess fat and then salt and pepper.  Heat the oil to hot in a saucepan large enough to hold the roast.  Salt and pepper the roast and put the roast in the sauce pan to brown the roast on all sides, generally about two minutes per side.

Place all your vegetables on the bottom of the crock pot and then place your roast on top of them.

In the same pan that you browned the roast, lightly brown the garlic, then add the broth, Worcestershire sauce,  and tomato sauce..  Reduce the liquid to about half and then pour over the roast beef.  Set your crock pot to low for 7 to 8 hours or on high for 4-5 hours,or until the roast is done.

**MY NOTES:  I had bacon grease left over from that morning's breakfast, so I browned my roast in bacon fat.  I don't like a lot of Worcestershire, so I reduced the amount to about 2 teaspoons.  Same goes for red pepper, I omitted it.  The original recipe didn't call for bay leaves, but I sampled the sauce after the beef had been cooking a while and felt it was lacking a little something (probably the additional Worcestershire and red pepper, smiles) and threw in some bay leaves.  Perhaps a wee bit of ketchup for acid would be good?

This made quite a bit of gorgeous meat juice.  I scooped some from the pot and put it in a saucepan and made a slurry of two tablespoons cornstarch to about a quarter cup of water.  I added a splash of it to the roast beef juices and  cooked and stirred until I saw how thick it was going to be, adding small amounts of slurry and stirring until I achieved a desired gravy consistency.  Taste for seasoning.  I'm thinking the rest of the meat juices will make a mighty fine minestrone with some of the leftover roast beef and frozen mixed vegetables and little pastas thrown in.
Posted by Katy ~ at Friday, January 06, 2012