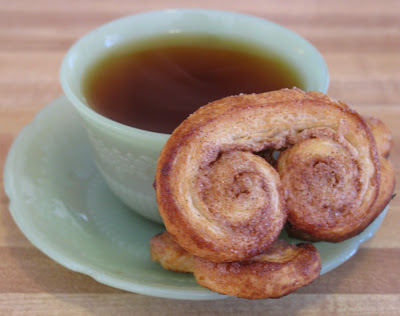 One breakfast treat that Ole Sweetie-Pi makes for himself is cinnamon-sugar toast.  I keep a jar of cinnamon-sugar on the spice shelf just for that reason.  So when I saw this super simple recipe for elephant ears on mrfood.com I knew it would be a winner here.  And I was right...
Six mini elephant ears and a cup of coffee later, Ole Sweetie-Pie was still saying how much he loved them!

Preheat your oven to 400*F.  Lightly coat a baking sheet with cooking spray.** 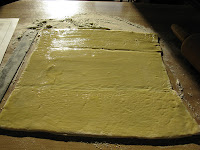 On a lightly floured surface, roll the puff pastry into a 12 inch x 12 inch square.  Brush with beaten egg. 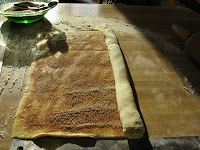 Combine the cinnamon and sugar in a small bowl.  Sprinkle 3 tablespoons of the cinnamon-sugar mixture even over the top of each sheet.
Roll one side of the pastry sheet into the middle. 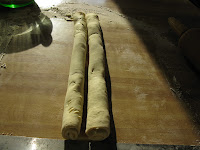 Then roll the other side towards the center so that the two halves meet in the middle, forming a scroll.  Cut into 1/2 inch slices across the scrolls. 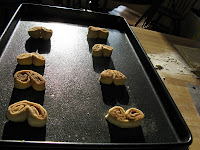 Dip one cut side into cinnamon-sugar and lay sugared side up on prepared baking sheet.
Bake for 20 minutes or until beautiful golden brown, then allow to cool for five minutes.  Makes 24 mini elephant ears.
MY THOUGHTS:  If you have it, I would suggest using parchment paper to bake these on.  The sugar carmelizes to the pan, making clean-up a bit sticky.
You don't have to make the whole recipe.  Just take out one puff pastry and rewrap the second and put back in the freezer to use another day. 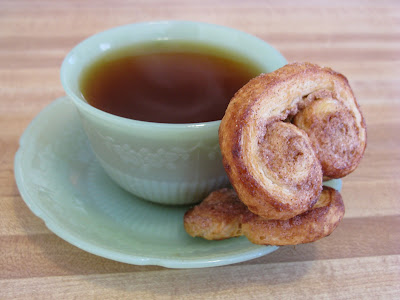