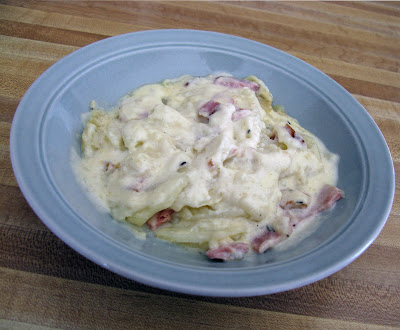 Lawsy mercy this was good!﻿  I had my doubts when I was putting this together, and fretted about it as it was cooking, but once Ole Sweetie-Pi and I took our first mouthfuls, it was love at first bite.  Creamy, cheesy, potato and ham goodness.  It's a old family favorite that needs to be enjoyed more often.  I know we'll be having this again and again. It reheated okay the next day, but some might need a small splash of milk to loosen the cheese.

A saucepan or saute pan that can go from stovetop to oven, without cracking or burning it would be perfect here to save a pan.  If you don't, prepare a separate, buttered casserole dish to put the mixture in before everything goes into the oven.

2 cups heavy cream
1 cup milk
a couple scrapes of a fresh nutmeg on a grater (or a pinch) of nutmeg
1/4 to 1/2 teaspoon fresh garlic from a jar (or 2 whole cloves garlic, minced)
pinch thyme (about 1/8th teaspoon)

Start by putting the cream, milk, thyme, garlic and nutmeg in a medium sized saucepan or saute pan.  Bring to a boil.  Add the potatoes and onions and cook over medium-high heat, stirring gently for about 3 minutes.  Cover the pan, turn the heat to medium-low and cook, stirring occasionally, for 15 minutes.**

Add the ham and pepper to taste. Add the cheese (reserving a small handful for top the casserole) and stir well.  If using a separate casserole dish, pour the mixture into the casserole.  Otherwise cover your saucepan/saute pan with a piece of tinfoil and put in your preheated 375*F oven.  Bake for approximately 35-45 minutes, or until potatoes are easily pierced with the tip of a thin, sharp knife.

**MY NOTES ~ When I saw the liquid to potato ratio in the pan, I panicked and thought I'd end up with potato soup, hence the fourth potato.  I probably could have added a fifth potato and it would have been okay.  The cheese and starchy potatoes thicken the sauce, so if it looks a little too milky at the end of cooking, I wouldn't hesitate to add a bit more cheese, grins.

Cooking times are approximate.  Depending on how thick or thin you slice your potatoes, you might not need to cook the potatoes on the stovetop for 15 minutes.  I used a mandolin to slice my potatoes, so they were pretty thin so I only needed  10 minutes cooking time before they were fork tender.  From there I put them in the oven and at the end of 35 minutes the dish was bubbly, hot, cheesy, and the potatoes were done.
Posted by Katy ~ at Friday, January 27, 2012